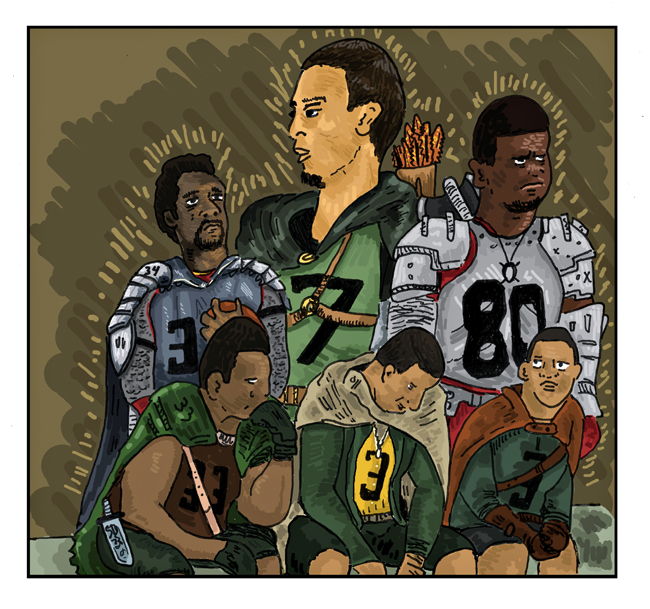 Christmas music playing in every office and holiday commercials hitting us from every angle imaginable can only mean one thing: fantasy football playoffs are almost here. In fact, this is the last week of regular season play in most leagues. Whether you are in need of a big win to fuel your playoff push or want to end the season with your head held high, here’s some fantasy advice that is all but gift-wrapped:

Kaepernick looks like the 49ers’ starter for the long haul after several impressive performances in place of QB Alex Smith, passing for three touchdowns and running for another in victories over Chicago and New Orleans. Amazingly, he is still available in the majority of fantasy football leagues. With his ability to hurt defenses with his arm and his legs, Kaepernick is a solid start for not only this week’s game against the Rams but for the rest of
the season.

Starting in place of the injured LeSean McCoy, the rookie out of Kansas State exploded into the scene on Monday Night Football, rushing for 178 yards and two touchdowns against the Panthers. Although ball security is an area of concern, expect an encore performance from Brown in a favorable match-up this week against a decimated Cowboys’ defense.

After a quiet first nine games of the season, Johnson has absolutely gone off the past two weeks, burning the Jaguars and Lions for a combined 461 yards and a touchdown. Although it might be a bit too much to expect him to keep up these gargantuan numbers, Johnson should be in for another big day against a weak Tennessee secondary.

Although Reggie Bush fans have not been happy with the former Heisman trophy winner’s decreasing touches over the past month, Thomas’ owners have loved his emergence as a consistent threat out of Miami’s backfield. However, a date with New England’s awful secondary and respectable run defense equates to the Fins relying on a more pass-heavy attack this week.

Wilson had a great outing last week, throwing for 224 yards and two touchdowns while also racking up 38 rushing yards. That being said, he faces a fearsome Chicago Bears defense that is the stingiest in the league against opposing fantasy quarterbacks and will struggle, as any rookie should, against an elite defense.

Givens torched the Arizona Cardinals last week for a career-high 115 yards and a touchdown in the Rams’ 31-17 victory. However with St. Louis facing San Francisco’s suffocating defense Sunday, which held Givens without a catch in their last meeting, there’s a risk he may have another quiet afternoon. If there is another option available with a more favorable match-up, consider benching Givens.