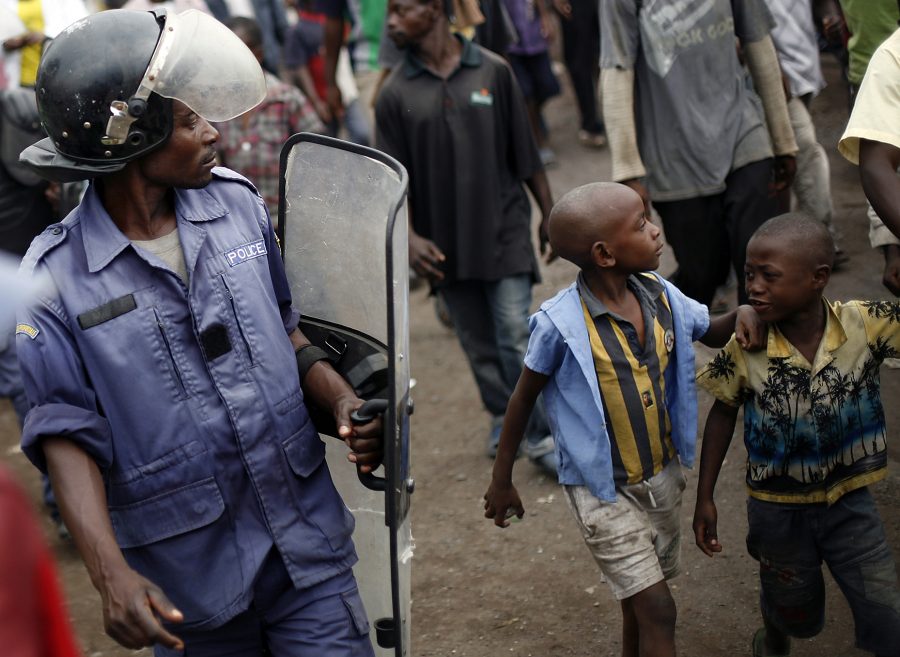 Congolese policeman in riot gear keeps an eye on Goma residents including street children who gathered for an anti Kabila demonstration supported by the M23 rebel movement in Goma, eastern Congo, Wednesday Nov. 28, 2012. Rebels holding Congo’s main eastern city on Wednesday gave mixed signals on whether they would abandon Goma but one thing was clear: For now, the insurgents still hold the strategic locale and no military force seemed strong enough or possessed the will to quickly push them out.(AP Photo/Jerome Delay)

GOMA, Congo — Rebels believed to be backed by Rwanda began retreating from the territory they seized last week and pulled out of the region of Masisi, their military leader said Wednesday, in the first concrete sign that international pressure has stemmed the advance of the fighters.

Gen. Sultani Makenga, the military chief for the eight-month-old rebellion known as M23, said that his fighters intend to abide by an ultimatum issued by neighboring nations that called for their withdrawal from Goma by Friday. He said he had ordered his fighters to retreat along the southeastern axis from Masisi to Goma, and they will then leave Goma via the northern route to Rutshuru.

“My soldiers began to retreat from Masisi yesterday. We will go via Goma and then after that we will retreat to 20 kilometers (12 miles) past Goma toward Rutshuru,” Makenga told The Associated Press on Friday. “I think that by Friday we will be able to complete this.”

The M23 rebel group is made up of hundreds of soldiers who deserted the Congolese army in April. Since then they have occupied numerous villages and towns in mineral-rich eastern Congo, culminating in the seizing of the crucial, provincial capital of Goma last week. Although they claim to be fighting because the Congolese government has not upheld their end of a March 23, 2009 peace deal, an in-depth report by the United Nations Group of Experts says that M23 is a Rwandan proxy fighting in order to control eastern Congo’s lucrative mines.

Congo’s government spokesman Lambert Mende, who is based in the country’s capital over 1,600 kilometers (1,000 miles) to the west, confirmed that they had received reports of troops pulling out of Masisi.

“Yes, there are reports of movements (of their fighters out of Masisi) but we won’t label it a retreat until it’s over. They have played this game with us before, where they say they are moving and then find a reason not to,” Mende said. “There will be no negotiations with Congo until they are 20 kilometers (12 miles) outside the Goma city limit.”

A regional bloc representing nations in the Great Lakes region of Africa had issued a deadline calling for M23 to retreat no later than Friday to 20 kilometers (12 miles) outside of Goma.

In Goma, there was skepticism over the rebels’ claim and confusion, after the leader of M23’s political wing insisted that the fighters were not leaving the city of 1 million that is the economic heart of one of Congo’s mineral-rich regions.

M23 Vice-Minister of the Interior Theophile Ruremesha told The Associated Press on Wednesday that Congolese President Joseph Kabila’s government needs to meet their wide-ranging demands for them to leave the city.

“Kabila has to meet our demands if we are to pull out,” he said. “For humanitarian reasons we cannot leave the town in the hands of just anybody,” he said. “Creating the neutral force will take some time.”

While some fear M23, which in only eight months has a record of carrying out executions and of forcing children into its ranks, other residents of this lakeside city are afraid of the undisciplined Congolese army that was pushed out of Goma by the rebels on Nov. 20. Dozens of people came out for an anti-Kabila rally, holding placards and pieces of cardboard decrying the distant government’s inept handling of the conflict.

“I want Kabila to leave because he hasn’t helped the people and our country hasn’t moved forward since he came to power,” said one of the marchers, Augustin Katombo. “I think M23 should stay because we don’t want the army to come back.”

About 1,500 U.N. peacekeepers were in Goma when M23 attacked on Nov. 20 and government forces fled, but the well-armed U.N. peacekeepers did not intervene, saying they lacked the mandate to do so. One of their main missions is to protect civilians.

Many people expressed anxiety about a possible attack by the Congo army, which lies in wait several dozen miles (kilometers) to the south of Goma.

“This is a nerve-wracking situation. It fluctuates every hour and we cannot even plan for tomorrow,” said Goma resident Ernest Mugisho. “The M23 needs to give a clear message because for us, the population, this is not good.”

The rebel group has a large new cache of 1,000 tons of weapons, including heavy artillery, that were abandoned by the fleeing Congo army last week, according to M23 president Jean-Marie Runiga. Six flatbed trucks carrying crates of ammunition were seen Tuesday being driven by M23 soldiers north from Goma.

A U.N. group of experts said in a detailed report last week that M23 is backed by neighboring Rwanda, which has provided them with battalions of fighters and sophisticated arms, like night vision goggles.