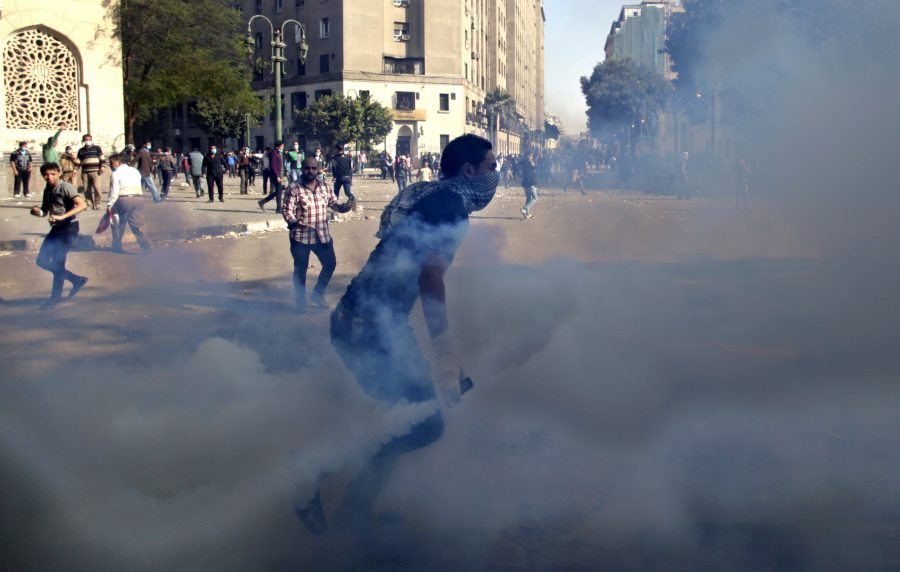 A widening dispute between the president and the nation’s judiciary is at the center of the uproar over a constitutional declaration placing Morsi above oversight of any kind, including by the courts. At least 200,000 protesters filled Cairo’s central Tahrir Square on Tuesday to denounce the decrees and call on the president to rescind them.

Judges with the high and lower courts of appeal decided that they will not return to work until Morsi rescinds his decrees, according to state TV. Many of the country’s courts already had stopped functioning due to individual strikes.

The high court of appeal is led by Mohammed Mumtaz Metwali, who also chairs the Supreme Judiciary Council, which oversees the nation’s court system. Members of the council met Morsi on Monday to discuss his decrees.

A statement issued later by the presidential palace strongly suggested that the president’s explanation of the decrees satisfied the council, but the panel has not publicly commented on the issue.

A statement by the judges of the high appeals court, known as the Court of Cassation, described Morsi’s decrees as an “unprecedented” assault on the judiciary and its principles that “defies belief.” It said the decision to stop work at all its circuits was also unprecedented but justified by the “magnitude” of the crisis.

In another show of defiance, the Supreme Constitutional Court, the nation’s highest, rejected charges made by Morsi and his Muslim Brotherhood that it is working to bring down his government.

The political turmoil was triggered Thursday when Morsi issued a constitutional declaration that placed him above oversight of any kind, including by the courts, and extended similar protection to parliament’s lower chamber and a 100-member panel drafting a new constitution.

Morsi and his allies in the Muslim Brotherhood, which has emerged as the most powerful political movement since the revolution that ousted Hosni Mubarak nearly two years ago, have accused the judiciary of being dominated by Mubarak-era appointees who are trying to undermine the new leader.

The constitutional court ruled in June to dissolve parliament’s lower chamber, which is dominated by Islamists, and was due to rule Sunday on the legality of the lower chamber and a 100-member panel drafting a new constitution.

A ruling, regardless of which way it goes, would constitute a direct challenge to Morsi, who took office in June as Egypt’s first freely elected president but has enraged pro-democracy activists who claim he is acting too much like the authoritarian leader he replaced.

The court also denounced Morsi’s claim that it was part of a “conspiracy” against him.

“The allegation that the (June) ruling was reached in complicity with others to bring down elected state institutions and consequently the state’s collapse … is incorrect and untrue,” the constitutional court said in a statement read by its deputy chairman, Maher Sami, in a televised news conference.

“But what is most saddening for the court’s judges came when the president of the republic joined, in a painful and cruel surprise, the continuing attacks against the constitutional court,” it said, alluding to comments made by Morsi on Friday in which he said the June ruling was leaked ahead of its official announcement.

A strike by the appeals courts and the rare criticism of the president in the Supreme Constitutional Court’s statement came a day after Egyptians poured into Tahrir Square — the epicenter of last year’s anti-Mubarak uprising — to protest Morsi’s decrees, which also gave him unlimited powers to “protect” the nation.

Clashes between some protesters and police continued Wednesday off Tahrir, near the U.S. Embassy.

The liberal opposition has said it would not enter a dialogue with the president about the country’s latest political crisis before Morsi rescinded his decrees. Activists planned another massive rally on Friday.