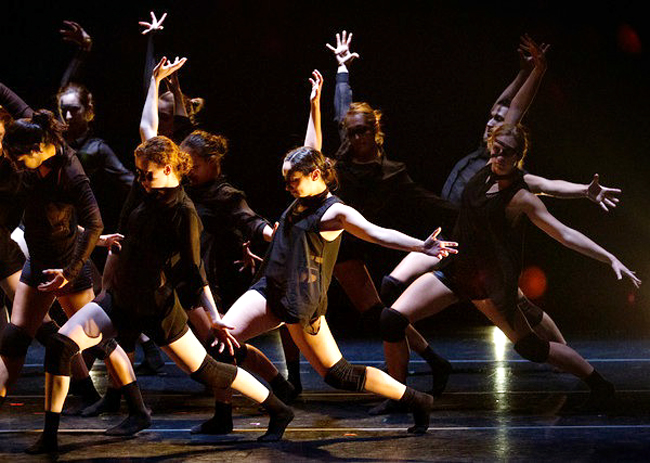 It is never clear why dancers emerge from trash bags, as is true with many of the elements in “Fall for Dance.” Instead, the show, which consists of five different works choreographed by modern dance greats like David Parsons and Robert Battle as well as UT professors and students, lives in confusion. The confusion is captivating though — the audience may not understand why people are coming out of trash bags, but the dances are intriguing nonetheless.

The show begins with “(Re)singing from the Underspace” choreographed by UT professor Charles O. Anderson. Through the traditions of African dance, this work aims to express the oppression of females. The combination of female oppression and African dance manifests itself in an odd manner; the music, a continuous track of spoken words, conveys female marginalization within society through derogatory terms like “bitch” and “whore” while the African dance movements in choreography convey images of slavery.

Through the slouch in their backs and the rhythm of their feet, members of Dance Repertory Theatre demonstrate that they are enslaved without props. At the same time, there is no character playing a slave master, so the assumption is that society’s marginalization of women, presented in the music, is the force enslaving these dancers.

In comparison, the second piece “Parsons Etude” choreographed by David Parsons, the critically acclaimed founder of Parsons Dance, is underwhelming in every way except the choreography. The choreography and dancing are spectacular. However, the costuming is plain and there is little symbolic meaning behind the movement of the dancers. The interest in this work is generated primarily through the suspenseful nature of the work’s musical score and through the choreography’s exploration of the concept of movement in sleep.

With the third piece, the aforementioned “Terminal Static,” the theatrics are revived. Dancing aside, “Terminal Static” by Sam Houston State professor Andy Noble, gives the audience the most to look at. There are wriggling garbage bags, and magnificent, yet scary, light structures that look like enormous illuminated waffles used as props. The dancing is also quite theatrical; the movements are animalistic, with spider-like movements and a certain strength and ferocity. This is the most urban and contemporary of all of the works in “Fall for Dance.” With ambulance sirens, music that sounds like dubstep and elements of a street dance battle toward the end of the piece, it alludes to inner-city culture.

The fourth work, “Perception Unveiled,” is the only work choreographed by a student. Senior Victoria Mora’s choreography shows the most traditional influence of all the works in the show. Like “Terminal Static,” lighting plays an important role in “Perception Unveiled.”  However, in this work the moon-like lighting combined with dancing promotes a sense of human vulnerability whereas “Terminal Static” conveys animalistic fierceness.

The final work, “Promenade” by Robert Battle of the Alvin Ailey American Dance Theater, is by far the most bizarre. The dancers, clothed in Victorian garb perform a courtly partner-type dance that fits the era of the costuming. What does not fit is the behavior of the dancers, who act like feral rabbits. However, the convulsive, rabbit-like movement in this dance makes the work entertaining. As with the other works, the audience may not understand why the dancers in “Promenade” are behaving in such a way, but it holds its attention nonetheless.

At its end, “Fall for Dance” may not convert viewers into lovers of modern dance as its punny name suggests. However, the memorable choreography and the eventful trash bag wiggle are certain to captivate an audience’s inner need for the eccentric.