Texas must find its ground game to upset Kansas State 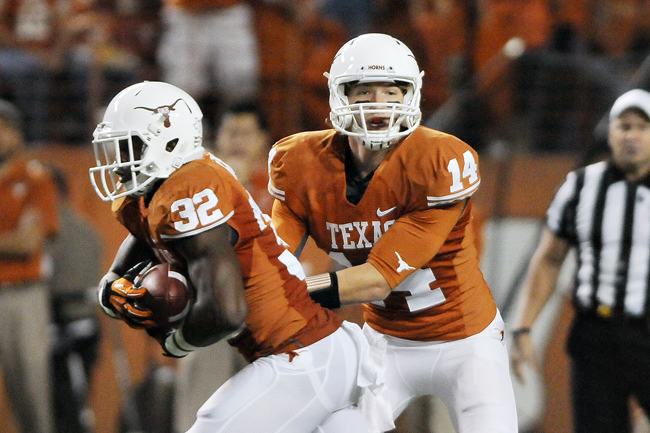 David Ash passes the ball off to  freshman running back Johnathon Gray,  but struggled to jumpstart the running game against TCU on Thanksgiving Day, recording only eighty-six rushing yards.  " />

David Ash passes the ball off to  freshman running back Johnathon Gray,  but struggled to jumpstart the running game against TCU on Thanksgiving Day, recording only eighty-six rushing yards.

The lack of production was, in part, caused because the Longhorns were forced to throw the ball in the second half, attempting to catch up to the Horned Frogs. Still, it was a frustrating evening for the coaching staff and everyone involved in the ground game.

“We’d like to [run it],” head coach Mack Brown said. “We didn’t run it much the other night. It wasn’t a running game night. I wish it would’ve been.”

But Brown’s assessment was mellow compared to offensive lineman Trey Hopkins’ when talking about the Longhorns’ pedestrian total on the ground.

The offensive line and the running backs know the rushing production must change against Kansas State for the Longhorns to defeat a talented, disciplined and balanced Wildcat team. It won’t be easy, however. The Wildcats are 18th in the nation against the run, allowing opponents an average of 121 yards per contest.

Kansas State is stout in the front seven, especially its linebacker core. Arthur Brown, one of the top linebackers in the country, was a preseason All-American selection. His 80 tackles and six tackles for loss this season have done nothing to knock down his stock. He’s not the only playmaker in the middle of the field. Junior Tre Walker was a preseason All-Big 12 selection, and he and Brown cover the field from sideline-to-sideline exceptionally well, keeping both the run and passing attack in check.

“They have two linebackers that are as good as anybody in the country,” Mack Brown said. “They can cover you man-to-man and pass rushing.”

However, it is imperative the Longhorns establish their rushing attack early. The ground game puts the offense into its flow, forcing the defense to stack the box with eight or more players later in the game. This allows one-on-one coverage to the outside, which opens up areas in the secondary for the passing attack. Perhaps most importantly, it would allow newly-minted starter Case McCoy a little time to get adjusted to the pace of the game.

“If we make people load the box, it will definitely take that pressure off of Case,” Hopkins said.

In the loss to TCU, the Longhorns abandoned the run early in the second half in an attempt to find an offensive spark after the Horned Frogs jumped out to a sizable lead. That won’t work against Kansas State. If the Longhorns become one-dimensional through the air, it’s a recipe for disaster.

If Kansas State forces Texas to throw, it will expose Case McCoy’s all-or-nothing tendencies. McCoy has an innate ability to extend plays and make something out of nothing, but the skill also causes errant throws that have been McCoy’s greatest criticism.

The absence of Malcolm Brown was notable in the loss to TCU. He didn’t touch the ball, and his powerful yet elusive running style could have made a difference against the eight man fronts the Horned Frogs presented.

It seems the coaching staff still isn’t 100 percent certain Brown is ready to carry the load coming off of a left ankle injury. He’s continuing to rehab his leg, but from what they’ve seen in practice, his teammates feel he’s ready to contribute.

“All our running backs are talented,” Hopkins said. “Johnathan Gray can’t get every snap in the game. I hope they wouldn’t do that to him, and then his feet might not be as useful. We have to use all our running backs, and I think [Malcolm Brown] realizes that. We need him back as quickly as possible.”

Printed on Thursday, November 29, 2012 as: Running a struggle for Horns