The lone senior, Sha’Dare McNeal leads the Longhorns into her final NCAA Tournament 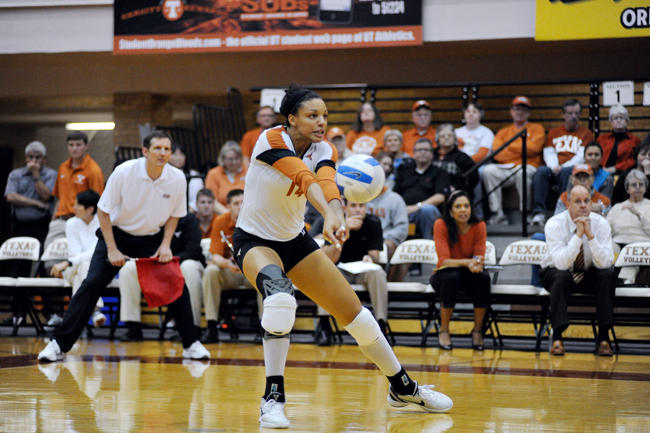 In the whirlwind that is volleyball season, Texas team members have found a calm leader in senior Sha’Dare McNeal.

She’s the one her teammates pinpoint as their quiet leader, a mellow force on the court even in the midst of chaos.

That laid-back attitude is signature of McNeal’s Southern California roots, a self-described innate personality trait that has served her well both on and off the court.

“I feel like it’s just my personality,” McNeal said. “I’m just a calm person and I really don’t let anything rattle me on the court.”

Entering college as the No. 5 recruit in the nation, there were ample opportunities for rattling. Yet McNeal swept pressure to the side, earning a spot on the 2010 Texas Invitational and Burnt Orange Classic all-tournament team as well as Academic All-Big 12 second team honors. In her second year on the team, she started all 33 matches and played in all 118 sets.

“Coming in, it was just a new experience,” she said. “I was ready to play, and I just embraced being on the team and learning a lot my freshman year.”

Four years and many games later, McNeal has stepped up into a leadership position on the team, guiding her younger teammates with her level- headed style.

“I’m a leader by example, so it’s just getting the girls ready for practice and telling them the goals that we have,” McNeal said.

Head coach Jerritt Elliott said seeing McNeal’s development has been a highlight of this season.

“She’s a big part of this program and has developed into a leader,” he said. “As a coach, you want to see players develop into confident young women, and I’m just pleased with where she stands with her confidence in herself and the lessons she can teach our younger players.”

Her home season could hardly have wrapped up on a higher note. McNeal had the last kill against West Virginia, whacking the ball over the net to conclude the sweep, which launched an explosion of applause and cheers from fans who longed to see the senior finish it up the right way.

Her team experience has left much deeper memories than squeaky gym floors, knee pads and plenty of airplane rides.

“It’s [been about] maturing as a person,” McNeal said. “Being around girls that are becoming my sisters. I like the closeness of our team. We all just mesh really well together, and it’s a joy practicing and playing with them.”

The No. 3 Longhorns dashed through the season with one conference loss, earning a lauded 23-4 record and a Big 12 championship trophy to commemorate their success.

As they head into this week’s NCAA Tournament, beginning Thursday, McNeal said the team is ready for the challenge new opponents and more pressure will provide.

“I feel really confident,” she said. “We’ve had really good practices leading up to it. It’s really exciting for us. A national championship has been the team goal for the past four years since I’ve been here.”

Titles, tournaments and trophies set aside, McNeal is sentimental about her last year competing for the Longhorns.

“I’ll miss everything,” she said. “The practices, the games. Everything.”