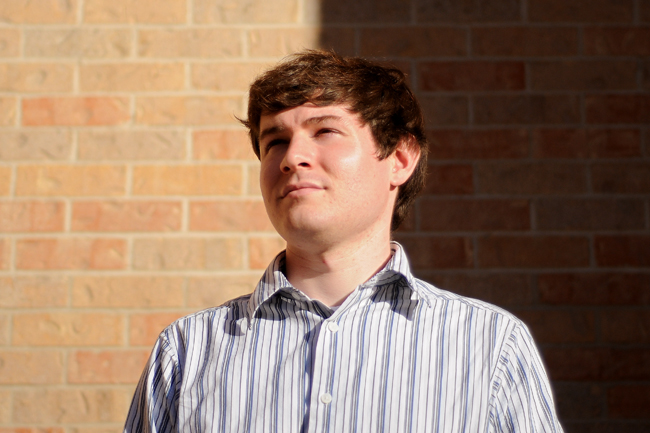 Physics honors senior William Berdanier is a recipient of the distinguished Marshall Scholarship for 2013, which will fund two years of study in the U.K.

Physics honors senior William Berdanier will join the ranks of scholars who have studied under the prestigious Marshall Scholarship next fall, an award given to U.S. students who have shown great academic merit, leadership and ambassadorial potential.

Berdanier was chosen along with 33 others from across the country to receive a Marshall Scholarship for 2013. The scholarship allows U.S. students with high abilities to pursue degrees at certain U.K. institutions. Berdanier was the only student chosen from UT this year. Since the scholarship program began in 1953, 22 UT students have won the award, and eight of those wins have been since 2001. The scholarship will fund two years of study for Berdanier and will consist of funds for university fees, cost of living expenses, an annual book grant and fares to and from the U.S.

Berdanier said for the first year of the scholarship, he will pursue a masters degree in Part III of the Mathematical Tripos at The University of Cambridge, and for the second year, a master’s of research at either Cambridge or the University of Oxford. He said after that he wants to pursue a Ph.D. in the U.S. and continue his research in physics.

Berdanier said he is very honored to have been named for the scholarship, and the magnitude of the accomplishment hasn’t fully sunk in for him yet.

“It’s amazing,” Berdanier said. “It’s a tremendous opportunity. I’m so happy to have won this.”

Larry Carver, English professor and liberal arts honors director, is UT’s Marshall Scholarship representative. Carver interviewed Berdanier for the scholarship Sept. 10 and has assisted him throughout the application process.

Carver said Berdanier has consistently excelled over other students while at UT.

“By all measures, Will is a gifted student of physics and mathematics,” Carver said. “Faculty members think he is one of the most gifted physics and math students that they have seen in a generation.”

In a letter of recommendation for the Marshall Scholarship, physics professor Gennady Shvets said he witnessed Berdanier excel throughout his four years at UT, and not just in his classes.

“Will is a remarkably capable young man who, in addition to choosing probably the most challenging double-major possible, physics and mathematics, is managing to find time for supervised research,” Shvets stated in the letter.

Berdanier currently has a 3.93 grade point average at UT. He has participated in the Dean’s Scholars Honors Program, has been selected for 13 scholarships and fellowships including a $7,500 award through the Barry M. Goldwater Scholarship, another award given to highly qualified scientists, mathematicians and engineers, has been invited to multiple academic talks and has been published. Berdanier is also an accomplished violinist, after taking lessons for more than 10 years.

Printed on Thursday, November 29, 2012 as: Student to study at Cambridge on prestigious Marshall Scholarship