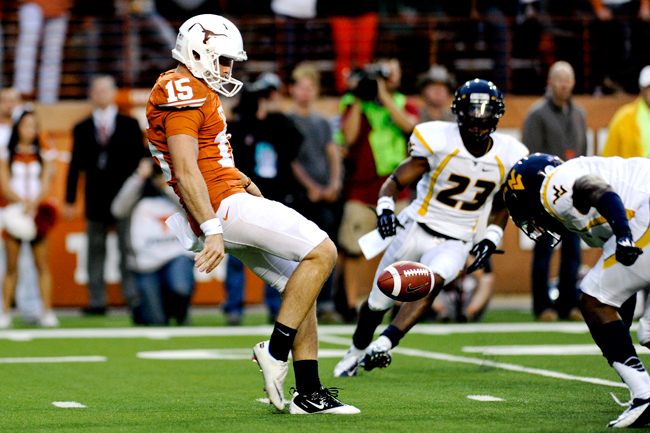 Senior punter Alex King (15) came to Texas after serving as the Duke Blue Devils' punter for the past four seasons. King also handled the quarterback duties for the Blue Devils' scout team, as well as playing the position in high school.

The depth chart experienced a huge change this week at quarterback, as Case McCoy assumes the starting role. However, that’s not even the most shocking transition, because a punter is now the third-string signal caller.

Alex King, Texas’ starting punter, will be tasked with the responsibility of learning a few select plays in the emergency that McCoy gets hurt and David Ash is unable to play due to a rib injury he sustained in last Thursday’s loss to TCU.

“He was out there throwing with the quarterbacks last night,” head coach Mack Brown said. “I told [co-offensive coordinator] Bryan [Harsin] to put him right in the middle of it because we have no guarantees.”

It may sound ridiculous to have a punter fill in quarterback, but King grew up playing the position in North Carolina, and was an all-state selection at Phillips Exeter Academy in New England during his post-graduate year. He also served as the emergency quarterback in his time at Duke. King transferred to Texas this season to pursure a graduate degree after spending his first four years with the Blue Devils.

“Alex is an athlete,” offensive guard Mason Walters said. “We have faith in him. I saw him throw the ball around a little bit yesterday, I was impressed.”

King received the backup nod over freshmen quarterbacks Connor Brewer and Jalen Overstreet. Brown doesn’t wish to burn their redshirt seasons by putting them for only a few plays in one game.

Both freshmen have yet to see a snap this season. If a situation forced either one of them to enter the game on Saturday, it would waste an entire year of eligibility.

“It’s one of those reasons I think we should have five years of eligibility,” Brown said. “I would love to bring one of those freshmen out to let them play. Still, you put them in for three plays against Kansas State and it costs them a year. I don’t think that’s fair.”

Brown also discussed the possibility of using one of the other many athletes on the roster that played quarterback in high school instead of King, such as safety Mykkele Thompson.

However, Brown doesn’t want to take away depth from other positions and also felt that King, a fifth-year senior, is more mentally prepared to handle the role.

“We’re in a position where none of them have played and none of them have taken any snaps,” Brown said. “We feel that Alex is smart. He’s mature. And he’s older. We’ll give him a limited package and not have to take someone out of position anywhere else.”

King’s package of plays will be limited. Co-offensive coordinator Bryan Harsin taught him a few running plays at the beginning of the season, and now his role will expand to encompass a few pass plays. But the playbook will be simple.

This isn’t the first time a non-quarterback has prepared in a backup role for Texas. In 2006, when Colt McCoy was injured and then-backup Jevan Sneed decided to transfer, wide receiver Quan Cosby prepared to take snaps if necessary. He learned five plays, but never had to enter a game.

The coaching staff hopes it’s the same case with King. But they know one thing. He’d be the best quick-kick quarterback they’ve ever had.

“We actually used him last night, Harsin said. “He took a couple shots down the field. He dropped back seven steps, punted it, right on the money. Hit a spiral.”