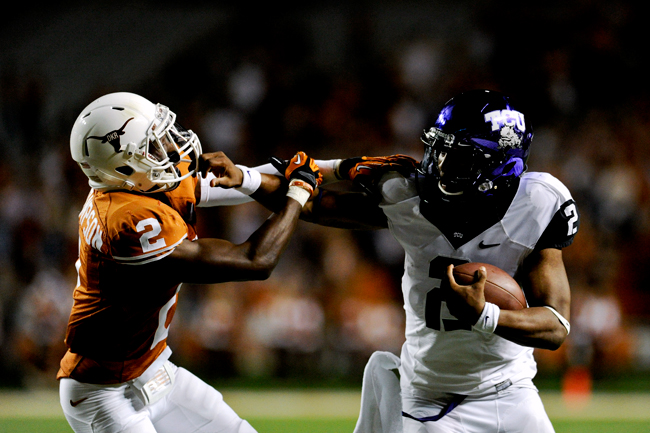 Safety Mykkele Thompson is unable to bring down TCU quarterback Trevone Boykin in the Longhorns' loss to the Horned Frogs last Thanksgiving. Texas face Iowa State this Thursday, marking its first weekday game not played on Thanksgiving Day since a win over Houston in 1993. Iowa State has won 10 of its last 12 Thursday contests.

Collin Klein had his first start at Kansas State as a sophomore against Texas in 2010. Mack Brown hadn’t expected him to start. He likely didn’t expect what Klein would do to the Longhorns that night, either.

Klein ran all over the Texas defense during the Wildcats’ 39-14 win. He rushed for 151 yards and two touchdowns while throwing the ball just four times.

Last season, Texas did what few teams have been able to do recently: contain Klein.

Klein was the highest scoring quarterback in the country with 162 points last year. Kansas State still pulled out the 17-13 win over Texas, although the Longhorns held him to just 83 yards and one touchdown.

“He’s hard to tackle,” Brown said. “They run him a whole bunch. He can run power for a quarterback. He can run option. He can beat you scrambling. Out here last year we knocked the heck out of him, knocked him around, and he still found a way to win the game with his throwing.”

It wasn’t easy to contain Klein last year. It won’t be this year either.

Klein has taken strides forward while the Texas defense has stepped back from its impressive 2011 campaign.

“He has gotten to be a better passer for sure than what he was a year ago,” defensive coordinator Manny Diaz said. “One of the most underrated aspects of their football team is they have three outstanding wide receivers that can match up probably about anybody in this conference … Because of his threat in the run game, that certainly pulls a lot of people across the line of scrimmage. They are explosive with what they do in the passing game.”

Klein has been characterized as a running quarterback. During the Wildcats’ win over Texas last season, he rushed 26 times and threw the ball 26 times. He sits at fifth in rushing in the Big 12, behind four running backs.

This season, his arm has been getting a bit more exercise. Klein has passed for 209.6 yards per game compared to last year’s 147.5 mark.

He sits at fourth in passing efficiency in the Big 12, just above David Ash.

Klein is now a senior and is one of the candidates for the Heisman. In the Longhorns’ regular season finale against Baylor last year, they put the finishing touches on Robert Griffin III’s Heisman resume. It will be a tough task avoiding a repeat of that in this year’s finale.

After Kansas State’s loss to Baylor two weeks ago, Klein has some work to do on Saturday to get himself back on top of the Heisman race.

“He can throw it, and he can run,” defensive tackle Desmond Jackson said. “He is the center of their entire offense, and we know that going into the game. We know that we have to not just put all of the emphasis on him, but make sure we do the right stuff for us to get a win.”

Sophomore defensive back Quandre Diggs has never faced a quarterback like Klein before.

“I don’t think we played a quarterback like him that runs the same, the way he does,” Diggs said. “He comes up, you know he’s going to run the ball, but he still continues to get yards. You have to be physical with those guys. If we out-physical them, I feel like it will be a good game.”