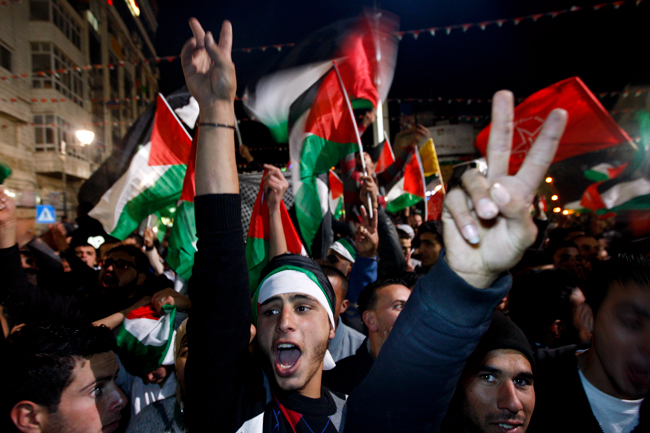 Palestinians celebrate as they watch a screen showing the U.N. General Assembly votes on a resolution to upgrade the status of the Palestinian Authority to a nonmember observer state, In the west bank city of Ramallah, Thursday, Nov. 29, 2012. The U.N. General Assembly has voted by a more than two-thirds majority to recognize the state of Palestine. The resolution upgrading the Palestinians’ status to a nonmember observer state at the United Nations was approved by the 193-member world body late Thursday by a vote of 138-9 with 41 abstentions. (AP Photo/Majdi Mohammed)

RAMALLAH, West Bank — Palestinians erupted in wild cheers Thursday, hugging each other, setting off fireworks and chanting “God is great” after the United Nations granted them, at least formally, what they have long yearned for — a state of their own.

The historic General Assembly decision to accept “Palestine” as a non-member observer state won’t immediately change lives here, since much of the territory of that state — the West Bank, Gaza Strip and east Jerusalem — remains under Israeli control.

Yet many Palestinians savored the massive global recognition — 138 of 193 General Assembly members voted “yes” — following decades of setbacks in the quest for Palestinian independence in lands Israel captured in the 1967 Mideast War.

“It’s a great feeling to have a state, even if in name only,” civil servant Mohammed Srour said standing in a flag-waving a crowd of more than 2,000 packed into a square in the West Bank city of Ramallah. “The most beautiful dream of any man is to have an independent state, particularly for us Palestinians who have lived under occupation for a long time.”

After the euphoria over the vote, Palestinians will return to their harsh reality. They lack most trappings of statehood, including control over borders, airspace or trade. In a further complication, they are ruled by rival governments, one run by Palestinian President Mahmoud Abbas in the West Bank and the other by the Islamic militant group Hamas in Gaza.

Yet, Palestinians say the recognition isn’t just symbolic and that U.N. recognition will strengthen their hand in future talks with Israel, which has lambasted the the Palestinian move as an attempt to bypas such negotiations.

The warm embrace by the international community could also help Abbas restore some of his domestic standing, which has been eroded by years of standstill in peace efforts. Hamas, entrenched in Gaza, has seen its popularity rise after holding its own during an Israeli offensive on targets linked to the Islamists there earlier this month.

After initially criticizing the U.N. bid as an empty gesture, Hamas has come around to supporting the popular move, with reservations.

Palestinians in the coastal strip also celebrated the vote, though on a smaller scale than after the massive eruption of joy in the streets after last week’s cease-fire deal with Israel.