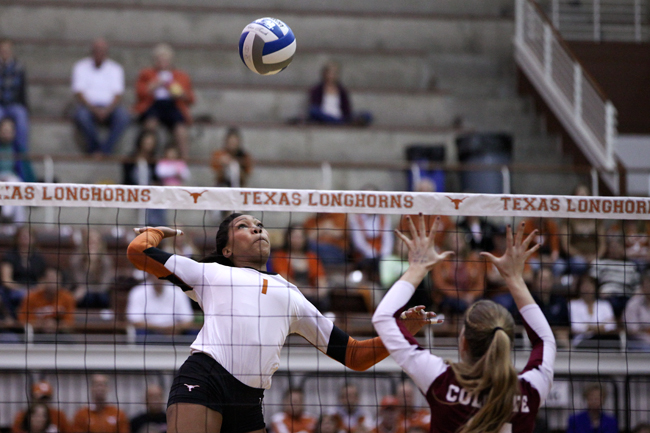 Khat Bell goes for a kill agaisnt Colgate. The Longhorns got out to a fast start with a 21 point win in the first game. They took the next tow games for a 3-0 sweep setting up a second round matchup agasint Texas A&M.

The Longhorns overpowered the Colgate Raiders in round one of the NCAA tournament Thursday night at Gregory Gym. The Raiders claimed the first point of the match, but never led again after that as the Longhorns came out with the 3-0 sweep (25-4, 25-11, 25-15).

“I felt very good about our attack tonight, it was focused, we had very low error,” Texas head coach Jerritt Elliott said. “We had a very good rhythm, but most importantly, we were prepared mentally.”

With the victory, the Longhorns advance to round two and will face former Big 12 rival Texas A&M on Friday at 7 p.m. in Gregory Gym. The Aggies defeated North Carolina State 3-1 earlier Thursday in round one at Gregory.

In set one, the Longhorns looked nearly perfect, ending the set with 17 kills and only one error while hitting an impressive .667 as a team. Junior outside hitter Bailey Webster led the surge with six kills with a .750 hitting clip. Junior Hannah Allison went on an 11-0 serving run in set one with three service aces.

“It put them back on their heels a bit, slowed them down,” Allison said of her service run and the dominating play during set one.

Colgate, who had not appeared in an NCAA tournament game since 1999, was not able to overcome an early deficit and a large energetic Texas crowd. The Raiders were stopped by an impressive Texas defense. They were held to only three kills with two errors and a .048 hitting clip.

“The crowd got us early and frazzled our passing,” Colgate head coach Ryan Baker said. “[Texas] is one of the best programs; I think they’re a national caliber team.”

Things settled down in the second, though Texas still won the set easily by a score of 25-11. The Longhorn defense held the Raiders to negative hitting with a clip of -.120. The Raiders had seven errors with only four kills. The Longhorns hit .433 with 16 kills and three errors to take the 2-0 match advantage going into the intermission.

After the break, the Longhorns seemed to get a little complacent during the third set. A few errors and several poorly placed balls allowed the Raiders to get to within one point early on in the set. The Raiders hit a match high .192 with nine kills and four errors.

About halfway through the set, the Longhorns woke up and ran away with the set, taking it 25-15. Texas had 18 kills with a .556 hitting clip in set three. A block by Webster and freshman Sara Hattis ended the game and sent the Longhorns to round two and the Raiders back to New York.

“It shows that we’re prepared,” Elliott said after the easy win. “I like what I see and I like this team.”

Printed on Friday, November 30, 2012 as: Longhorns use fast start to advance