Texas looks to continue its undefeated streak against struggling opponent 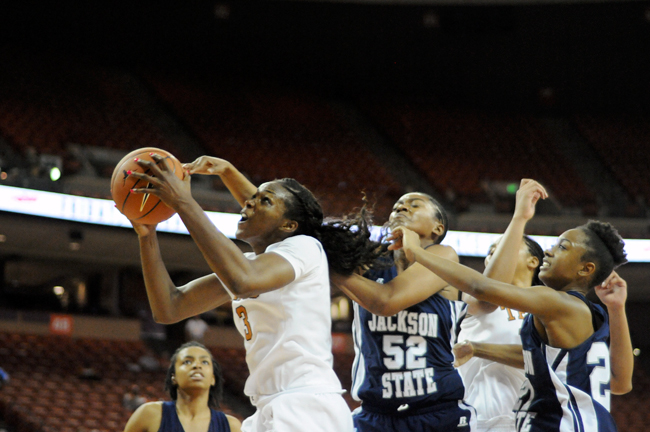 Sophomore forward Nneka Enkempali takes a shot during Texas’ win over Jackson State. She is the first Longhorn since Tiffany Jackson in 2006 to record double-doubles in her first four games.

Four years ago the Longhorns went 11-0 to start their season. Though they have not been able to match that recently, they have a chance to climb to 5-0 for the first time since 2008.

On Friday, Texas will try and achieve just that. The young team will face Texas A&M-Corpus Christi right here in Austin.

The Longhorns, ranked No. 13 in the AP poll and No. 18 in the USA Today poll, come into the game playing some of their best basketball. Sophomore forward Nneka Enemkpali leads the team with four straight double-double games, on pace to tie the program record of five. In addition, freshman center Imani McGee-Stafford had a breakout game last weekend against Central

Connecticut where she recorded her first career double-double and tallied nine blocks.

The Islanders, on the other hand, aren’t having one of their best seasons so far. They started 0-7 with some of those losses coming by a large margin. However, their schedule has been one of the hardest they’ve seen in recent years. They have already played tough big-name teams such as Auburn, Colorado and Indiana. Texas A&M Corpus-Christi, not an opponent to take lightly, is averaging about 51 points per game and looking to get its season back on track.

The last time these two teams met was four years ago in 2008. The Longhorns easily downed the Islanders in a 87-36 win, continuing Texas’ perfect streak in the series and winning all of five games.

A big key to the game for Texas is rebounds. This season, the Longhorns are leading the league with a +20.3 rebound margin. They have outrebounded their opponents 211-134 in their first four games of the season.

According to junior guard Chassidy Fussell, the team is just playing a better game than it did last year. The team’s new style is making it easier for members to play together well and continue their successful season thus far.

Texas and Texas A&M Corpus-Christi tip off at 11 a.m. Friday.