Unaccustomed to playing role of spoiler, Texas has chance to knock K-State out of Big 12 title race 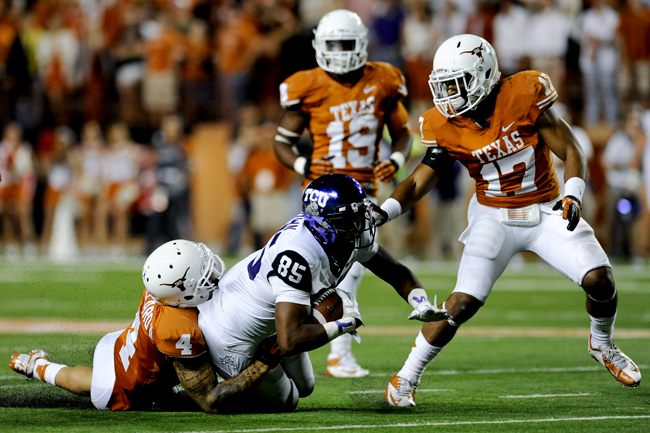 Kenny Vaccaro tackles TCU wide receiver LaDarius Brown during the Longhorns’ 23-10 loss to the Horned Frogs last Thursday. Texas goes into its regular season finale against Kansas State on Saturday as double-digit underdogs, an unfamiliar role for the Longhorns.

The Longhorns will be in an unfamiliar spot this weekend when they play the role of spoiler.

Kansas State, out of the national championship picture because of a loss to Baylor in its last game, still controls its own destiny in the Big 12 title race. All the Wildcats have to do to capture the conference crown is beat Texas.

The Longhorns are used to having the target on their backs, playing the team with nothing to lose at the end of the year. Now they’re the ones with a chance to knock someone off the pedestal.

“There’s really no pressure,” junior guard Mason Walters said. “I know we’re going in playing the underdog role. I’ve never really enjoyed playing it but, at the same time, it does have its advantages.”

What bowl Texas plays in doesn’t depend on the outcome of its regular season finale in Manhattan, Kan. on Saturday as much as it depends on other games. If Oklahoma falls to the TCU team that upset the Longhorns last week, it could cost the Sooners a chance at playing in a BCS bowl, which could mean Oklahoma taking Texas’ spot in the Cotton Bowl.

Even the MAC title game between Kent State and Northern Illinois could have an impact on where the Longhorns play this postseason. If Kent State, currently ranked No. 17 in the BCS standings, beat the Huskies and move into the Top 16, they’d earn an automatic berth into a BCS bowl. That could also knock OU out of the BCS bowl picture.

Still, the chance for the 8-3 Longhorns to surpass last year’s win total with a win over Kansas State — who they haven’t beaten since 2003 — would be significant, even if it didn’t affect where they played their bowl game.

“With them being a top-10 team, yeah, it is kind of a spoiler alert,” junior defensive back Adrian Phillips said. “If we win over Kansas State, it would open up a lot of doors for us. It would be taking the right steps toward where Texas needs to be.”

The Wildcats have had two weeks to think about everything they did wrong in a 52-24 loss to Baylor. They’ve had Texas’ number recently and will be playing at home with a chance to clinch a conference title. And they won’t be happy.

“I expect them to be in a very bad mood,” junior offensive tackle Trey Hopkins said. “But I expect us to have a chip on our shoulders after this past week.”

Texas won’t be coming off a bye week like Kansas State. But the Longhorns have proven that they can bounce back from a disappointing performance. They were an underdog in Lubbock when they faced Texas Tech following a narrow win over last-place Kansas before handily beating the Red Raiders.

“I understand Kansas State is probably a little upset about losing control of their own destiny after the Baylor game,” Walters said. “However, this team isn’t really happy about what happend

Thursday against TCU and we understand that we have a limited opportunities left to prove that this team can play great football when we decide to do it.”

The Longhorns, who couldn’t spoil Robert Griffin III’s chances to win the Heisman Trophy in their final regular season game last year, will have to play great football to knock off Kansas State. The Wildcats are 12.5-point favorites, and for good reason.

If Texas plays the way it did against TCU, Kansas State could win by a lot more than 12.5 points.