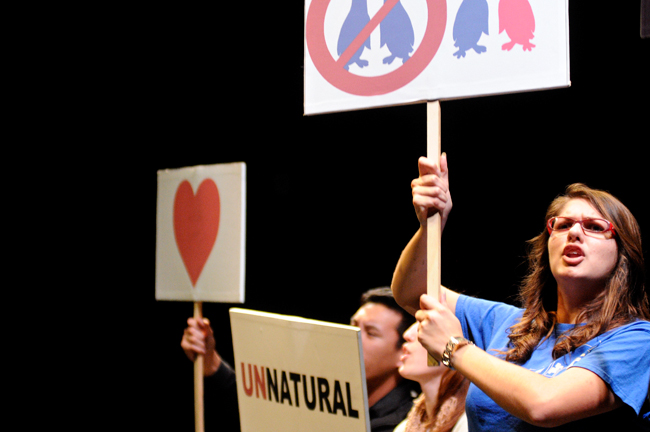 Facilitator Madilynn Garcia practices her act during And Then Came Tango rehearsal Thursday night before the day of the first show. The play will began at 7 p.m. in the Brockett Theater inside the Winship building.

Just like how the baby penguin at the center of “And Then Came Tango” finds a loving family with two male penguins, the play has found an unexpected home at local charter schools, private schools and UT.

“And Then Came Tango,” an original play written by theater and dance graduate student Emily Freeman, will have three performances at the Oscar G. Brockett Theatre beginning Nov. 30.
The performances were scheduled after the play’s original 10-performance tour of AISD schools was cancelled in a mutual AISD and UT decision.

The play, which centers around two male penguins who adopt an abandoned egg, was discontinued when AISD officials raised concerns about the “age appropriateness” of the play’s content after a showing at Lee Elementary School.

In an email The Daily Texan obtained through open records requests, Gregory Goodman, AISD’s fine arts director, cited the potential controversy the play might produce as a reason for the district’s decision.

“Elementary schools typically, most especially in the primary grades, do not delve into human sexuality, religion or other politically hot topics,” Goodman said in the email.

Though the play will not have any more performances at AISD schools, several other schools have held showings, including UT.

Leslie Lyon, spokesperson for the College of Fine Arts, said the decision to put “And Then Came Tango” on UT stages was met with a warm reception. She said the theater will seat up to 250 people for each performance, which is more than the standard audience size.

“We increased the capacity in response to the positive feedback we’ve received from patrons,” Lyon said. “Much of that seating will be on the floor.”

In addition to the three showings at UT, students also performed the play at several non-AISD schools, including religious schools and preschools. All Austin Cooperative Nursery School, Austin Jewish Academy, Del Valle Middle School, Austin Discovery School and Round Rock High School all hosted performances of the play this month.

St. Francis School, an interdenominational private school, hosted the play for its 57 second and third grade students. Head of school and founder Barbara Porter said she first learned of the play from a parent in the community who later put her in contact with the College of Fine Arts.

“I thought it would be a good idea,” Porter said. “It sounded like a darling story, and fit in with our inclusive parent and student body.”

However, Porter said the school asked every parent to sign a permission slip before the play. She said only three families chose to opt out of the performance.

“Families take many different forms,” Porter said. “I personally thought it was an absolutely charming play, and a beautiful little story.”

“The environment at Austin Jewish Academy has always been very warm, very open, very accepting,” Newberg said. “There are kids from all backgrounds, all different areas of observance, the school is very socioeconomically diverse, and yes, there are kids with two moms.”

The play will run at the Brockett Theatre through Dec. 2.