Texas Longhorns fall to Kansas State Wildcats due to turnovers, second half struggles 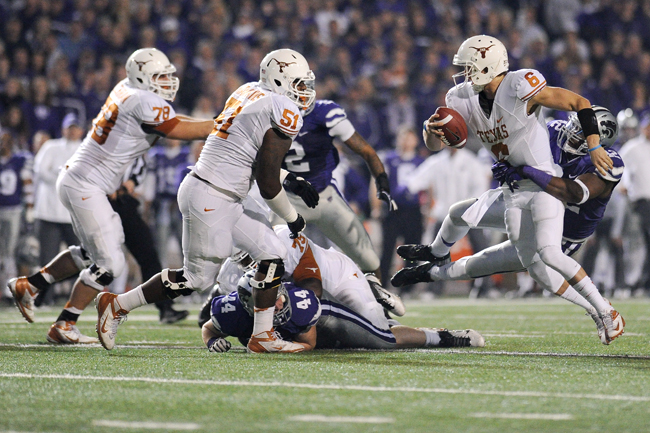 A Kansas State defender tackles quarterback Case McCoy Saturday in Manhattan, Kansas. Despite a promising first half of play, Texascould not handle a second half offensive explosion by KSU. McCoy finished with two touchdowns and an interception.

The Longhorns’ regular season is now over and, thanks to Kansas State’s finishing touch, they finished with an 8-4 record.

Not exactly the season Texas was hoping for.

Even with a new quarterback at the helm, Texas was unable to do the unthinkable. Kansas State came alive in the second half and defeated Texas 42-24.

Case McCoy started the game with an incompletion and an interception, but then had 17 consecutive completions. He finished with 314 yards, two touchdowns and two interceptions.

Collin Klein, hoping to put the finishing touches on his Heisman resume, took advantage of McCoy’s interceptions and scored touchdowns on both following possessions. Klein had two rushing touchdowns, a passing touchdown and an interception in the game.

Klein didn’t have an incredible performance, but he was vital in pulling the Wildcats ahead in the second half.

“I have watched [Klein] for three or four years now and he is so big and unselfish,” head coach Mack Brown said. “He is also hard to tackle, is accurate with his passing game, and that is what makes him such a great player.”

The Longhorns entered the locker room at halftime with a 10-7 lead, but the second half was very different from the first.

“They got a little bit of momentum and got the crowd back into the game, that is just a part of college football,” McCoy said. “As long as we fight, it does not matter what bowl game we go to. We will have a great shot at winning.”

John Hubert’s three rushing touchdowns, one of which was a result of a Quandre Diggs fumble, and Klein’s 9-yard rushing touchdown in the second half put the win out of the Longhorns’ reach.

After holding Kansas State to just 114 total yards in the first half, the Wildcats scored on their first three possessions in the second half. The Wildcats started the third quarter with a 75-yard touchdown drive that ended in a John Hubert 2-yard run into the end zone.

“Basically, they just out-executed us,” safety Adrian Phillips said.  “They did what they were supposed to do, and we did not come out to do our job after halftime. That is why we got hurt.”

The Longhorns knew their running game would need to perform to succeed against the Wildcats, but unfortunately, they only had 99 rushing yards.

After being sidelined with an ankle injury and having limited playing time since his return, Malcolm Brown finally made the return he was hoping for and scored both of the Longhorns’ touchdowns in the second half. He scored on a 2-yard run and on a 9-yard reception. He had seven rushes for 40 yards and averaged 5.7 yards per carry.

But it wasn’t enough to respond to the Wildcats’ offensive surge.

“We were sitting there and K-State had just taken the lead and we had been going back and forth, back and forth,” senior guard Mason Walters said . “Our offense had a drive that stalled out. They played good defense on the drive. We just could not get anything going.”

Texas’ three turnovers and struggles down the stretch lost the Longhorns the game and allowed Kansas State to clinch the Big 12 title and a trip to the Fiesta Bowl. It also concluded a subpar regular season for the Longhorns.