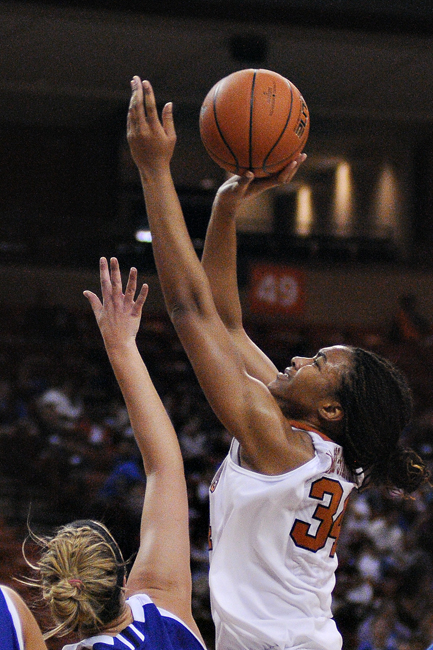 The Texas Longhorns defeated Texas A&M-Corpus Christi 79-30 behind freshman Imani McGee-Stafford’s 20 points and 11 rebounds, improving to 5-0 for the season. The No. 13 team in the land stifled the Islanders with constant pressure early, holding them to 9 points on 9.7 percent shooting in the first half.

“I’ve been continually impressed with how our team has started games,” head coach Karen Aston said. “I really love teams that are ready to play when the tip happens and I’m a big believer in setting a tone in the first four or five minutes of a game. I’m impressed with how we’ve done that.”

Texas used its presence inside to punish the Islanders throughout the contest, out-rebounding them 58-35 while scoring 46 points in the low block to its opponent’s 9. The team also scored 21 second chance points to the Islanders’ 0, showcasing its ability to beat opponents on the glass and capitalize on their weaknesses.

Karen Aston has been pleased with the improved cohesiveness of her team as the season has progressed. After banding together to hold its opponents to the fewest points allowed by the squad since 2006, in addition to shooting 45.1 percent with 24 assists on the offensive end, Aston’s pleasure continues to grow.

“It’s very hard to keep the team as focused because we a have a lot of young players and they lose their focus quite often,” Aston said. “I’m really proud of Ashley [Roberts] from that standpoint because I can see she is starting to get more comfortable in our system and her maturity is going to help us down the stretch.”

In addition to dominating the post, Texas played its signature style of basketball by controlling the tempo of the game while compiling 14 fast-break points. The guard play that has been a source for much of the team’s success in the past is emerging as a nice complement to the domination in the post.

Roberts was a key to much of the success in this game, playing a season high 33 minutes while doing a bit of everything with nine points, four rebounds, five assists and four steals in her first start as a Longhorn. Junior guard Chelsea Bass also made quite an impact, scoring 11 points in her first game back since an injury sidelined her for much of last season.

“It was a really important and special game for me,” Bass said. “Coming back from injury has been a long road and I just wanted to come out and show that I have been working really hard to get back.”

The Longhorns will carry their 5-0 record into a battle with UCLA Saturday.