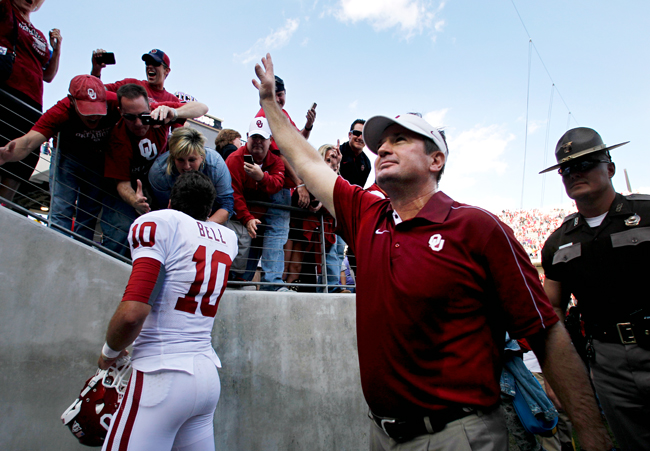 Head coach Bob Stoops and his Sooners fell short of a BCS bowl, and will face Texas A&M in the Cotton Bowl on Jan. 4.

Because of the current BCS format, the Oklahoma Sooners were bumped out of contention for a BCS Bowl game berth despite a 10-2 record and a share of the Big 12 conference title. Oklahoma was considered a favorite to earn an at-large bid to a BCS game, but its hopes were squashed when MAC champion Northern Illinois finished in the Top 16 to earn a berth in the Orange Bowl. Kansas State, which also finished 8-1 in conference play, received the Big 12’s automatic BCS bid thanks to its 24-19 victory over the Sooners on Sept. 22. Oklahoma accepted its bid to play in the Cotton Bowl, where it will take on former conference rival Texas A&M.

Big 12 sets bowl record
Nine of the 10 teams in the Big 12 Conference qualified for bowl games in 2012, setting a new collegiate mark for postseason eligibility. The 90 percent of teams eligible for bowl games is the highest percentage ever in the FBS, and the Big 12 is the only conference this season other than the SEC to send nine teams to a bowl. Only one Big 12 team, Kansas State, earned a bid to a BCS game, but every other team in the conference besides Kansas will play in a postseason bowl. The conference was arguably the strongest in the FBS across the board this season, as Big 12 teams went undefeated against teams that did not qualify for a postseason game. Likewise, Big 12 teams had the highest win percentage in non-conference games, going 26-4.

Klein makes Heisman stand
Kansas State quarterback Collin Klein’s Heisman chances took a serious hit when the Wildcats suffered a late-season loss to Baylor, but the senior made a strong case to remain in contention in his final regular season game against Texas. Klein threw for 184 yards and a touchdown against the Longhorns and rushed for another 103 yards and two scores. On the season, Klein has thrown for 2,490 yards and 15 touchdowns while rushing for 890 yards and 22 touchdowns en route to a conference championship and a trip to the Tostitos Fiesta Bowl. Other finalists for the Heisman include Texas A&M quarterback Johnny Manziel, who set the SEC mark for all-purpose yards as a freshman this season, andNotre Dame linebacker Manti Te’o, who has led the Fighting Irish to the BCS Championship game.

Kansas winless in Big 12
For the second consecutive season, the Kansas Jayhawks finished the year winless in conference play. With its loss to West Virginia on Saturday, Kansas finished the year 0-9 against Big 12 opponents and extended its conference losing streak to 21 games. The Jayhawks struggled to move the ball through the air all season and this was a major source of their ineptitude on offense. The play of junior running back James Sims was inspiring, however, as his 10 touchdowns led the team and his 1,013 yards on the ground were good for second in the Big 12.

Printed on Tuesday, December 4, 2012 as: Sooners fall out of BCS after NIU crashes party