Texas heading to Alamo Bowl to take on Oregon State 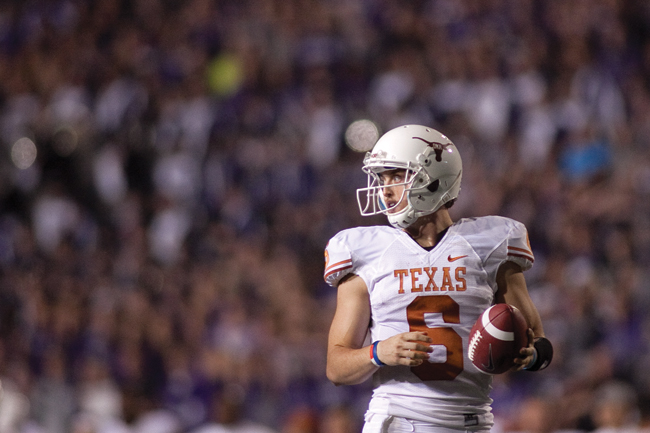 It wasn’t the bowl Texas was hoping for.

After Texas’ win over Cal in the Holiday Bowl last year, the Longhorns hoped to find their way back to a BCS bowl this season. Instead, they finished third in the Big 12 and will take the short trip to San Antonio to take on Oregon State in the Alamo Bowl on Dec. 29.

The Beavers finished 9-3 this season and will likely be favored in the game. Mack Brown’s team, which sits at 8-4, will need one more win to improve upon last year’s record.

Oregon State is 34th in the country in total offense, while Texas ranks 37th. The Pac-12 is known for explosive offenses and the Beavers will challenge Texas’ struggling defense.

“It’s going to be very exciting,” said sophomore running back Malcolm Brown. “I know our defense loves a challenge. So I’m excited to see them play against a fast-paced team like those Pac-12 teams.“

The Beavers had a better season than expected. After a 3-9 record last year, they found a way to finish third in the Pac-12 North by beating top teams UCLA and Wisconsin. Two of their three losses were to Stanford and Washington and both were by no more than four points.

“It’s going to be a great challenge for our football team,” defensive coordinator Manny Diaz said. “You look at their scores — they’ve hung some big numbers on some quality opponents. It will be another step in the process for us defensively, of trying to improve and get better week in and week out. I think our guys will be up for the challenge.”

Sophomore quarterback Sean Mannion ranks 26th in the country in passing yards per game. His combination with receiver Markus Wheaton has caused Pac-12 defenses a lot of headaches. On Saturday, Wheaton broke the school record for total receptions with 224. Based on its performance so far this year, the Texas defense will need to prepare well for this offense.

While the Oregon State offense lives up to its Pac-12 expectations, its defense sits in fourth in the Pac-12. For Texas, which has struggled to score in its last two games, both of which were losses, the Beavers will be a test.

After Texas’ 21-10 win over Cal, the team hoped the momentum gained would roll over to this season. It’s hard to say whether or not this season was more successful than last, but how Texas fares against Oregon State will be a significant determining factor.

“Our mentality is that next year starts today,” Diaz said. “We just watched the Big 12 champions celebrate within 50 feet of us. That’s an image that we want to keep in our minds this entire off-season, until we get to play again. The work to doing that starts now. Everything will be built through these practices for this bowl game, to use as a springboard for a run at the championship next season.”