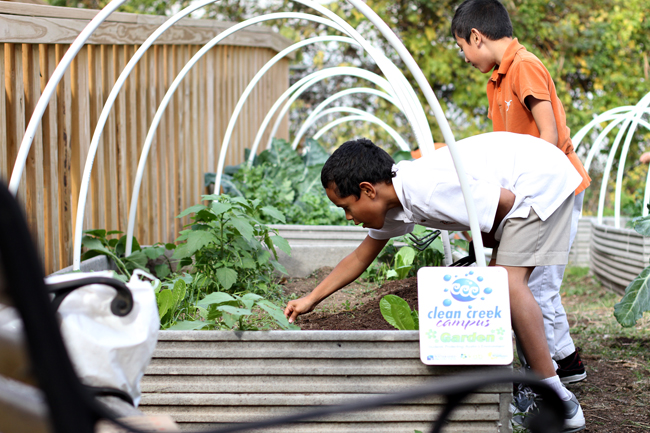 UT Elementary School received a $100,000 grant from the State Farm Youth Advisory Board for use toward a community garden.

It was one of 68 schools and nonprofit organizations to receive grants from the board this year for service-learning projects, which supplement classroom instruction with hands-on projects that aim to improve the community. State Farm is an insurance company based primarily in the U.S. The board, composed of 30 members nationwide from the ages of 17-20, distributed $5 million among the grant winners.

UT Elementary principal Kelly Mullin said the community garden will be an extension of what the school already teaches its 304 students through its current campus garden.

“Now we’re educating the kids, there is a little more pressure at home on their parents, so they’re actually going home and teaching their parents healthy eating and healthy lifestyle,” Mullin said. “They’re thinking about how they can take what they have learned and teach other people. That was really the motion behind the garden.”

Students in second through fifth grade are now helping with ideas for the garden’s setup and the kind of produce that will be grown when the garden becomes operational.

State Farm spokesperson Amelia Folkes said the advisory board supports the project because the elementary school allowed its students to contribute many ideas to the proposed garden.

“The elementary school and the teachers will incorporate all aspects of their learning into what they’ll do with the community garden, not just the obvious ones like the health class and nutrition class,” Folkes said. “Other young people saw the value in what they are already doing and rewarded that work and took it to the next level.”

Jake Stewart, director of Austin’s Sustainable Urban Agriculture and Community Garden program, said the program will help the school with its garden. The program, along with Mayor Pro-Tem Sheryl Cole and Capital Metro, which owns the land next to the school, will assist the school in ensuring the safety of the property along a rail line and the land’s soil quality. The school is on East Sixth Street near Pleasant Valley Road.

Stewart said community gardens can come together quickly and be well maintained when groups like the school make the project a priority. The school plans to have the garden ready in time to plant for a fall harvest to use the produce for school meals.

“We want to make sure everything is safe not only for the kids when they are in the garden but in the soil for when it reaches the cafeteria too,” Stewart said.