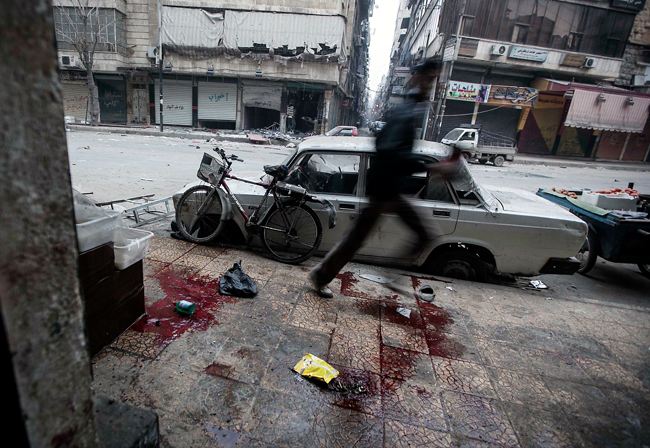 BEIRUT — Syria’s civil war is closing in on President Bashar Assad’s seat of power in Damascus with clashes between government forces and rebels flaring around the city Tuesday, raising fears the capital will become the next major battlefield in the 20-month-old conflict.

Numerous reports emerged of at least a dozen people killed near the ancient city and elsewhere, and the regime said nine students and a teacher died from rebel mortar fire on a school. The state news agency originally said 30 people had been killed in the attack.

While many of the mostly poor, Sunni Muslim suburbs ringing Damascus have long been opposition hotbeds, fighting has intensified in the area in recent weeks as rebels press a battle they hope will finish Assad’s regime.

“The push to take Damascus is a real one, and intense pressure to take control of the city is part of a major strategic shift by rebel commanders,” said Mustafa Alani of the Geneva-based Gulf Research Center. “They have realized that without bringing the fight to Damascus, the regime will not collapse.”

The increased pressure has raised worries that he or his forces will resort to desperate measures, perhaps striking neighbors Turkey or Israel, or using chemical weapons.

NATO foreign ministers approved Turkey’s request for Patriot anti-missile systems to be deployed along its southern border to defend against possible strikes from Syria.

“We stand with Turkey in the spirit of strong solidarity,” NATO Secretary-General Anders Fogh Rasmussen told reporters after the meeting in Brussels. “To anyone who would want to attack Turkey, we say, ‘Don’t even think about it!’”

Before the meeting, Fogh Rasmussen said he expected any use of chemical weapons to get an “immediate reaction from the international community.”

On Monday, President Barack Obama said there would be consequences if Assad made the “tragic mistake” of deploying chemical weapons, and Israeli Prime Minister Benjamin Netanyahu said he agreed with the U.S. position.

“We are of the same opinion, that these weapons should not be used and must not reach terror groups,” Netanyahu said.

U.S. intelligence has seen signs that Syria is moving materials inside chemical weapons facilities recently, though it is unsure what the movement means. Still, U.S. officials said the White House and its allies are weighing military options should they decide to secure Syria’s chemical and biological weapons.

In July, Foreign Ministry spokesman Jihad Makdissi told a news conference that Syria would only use chemical or biological weapons in case of foreign attack, not against its own people. The ministry then tried to blur the issue, saying it had never acknowledged having such weapons.