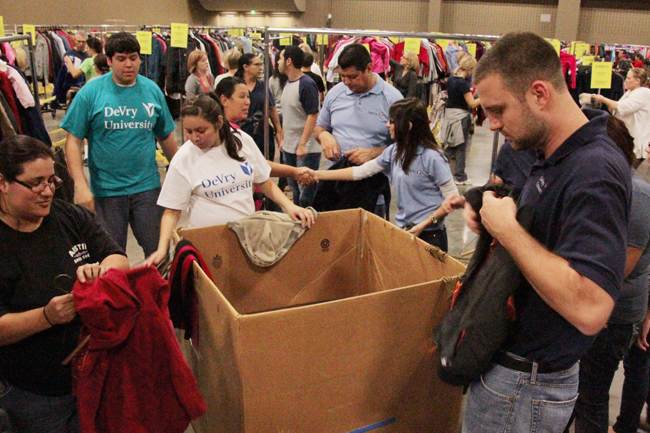 Volunteers at the Palmer Events Center sort through donations made in support of Coats for Kids Wednesday night. " />

Volunteers at the Palmer Events Center sort through donations made in support of Coats for Kids Wednesday night.

Despite the increase in charitable donations during the winter months, philanthropic organizations in Austin say they are not in competition with each other, and are instead focusing on their own efforts.

Karen Frost, director of non-profit relations for I Live Here, I Give Here, said charities recognize that children’s charities will receive the bulk of donations during December, so organizations strategically plan their fund-raising efforts for another month. The organization is a non-profit that promotes philanthropy in Central Texas.

Rod Caspers, director of University events, said many organizations, offices and individuals contribute to Orange Santa, a program that collects gift donations for UT faculty and students in need.

He said the program receives wide support in November and December.

“We see the request being made more at the holidays because it is the season of giving, if you will,” Caspers said.

Caspers said the program helped about 320 families and 1,000 children in 2011. He said the organization’s volunteer positions are filled every year, and some people are even on a waiting list to volunteer.

Tara Anders, director of marketing for Goodwill Industries of Central Texas, said people do not always give equally to all charities. She said Goodwill receives more donations after the holidays because people are clearing space in their homes for new items.

“There is an increased awareness of charity giving, but that may dilute what one charity receives over another because it is a popular time to give,” Anders said.

Coats for Kids is a jacket drive that provides children living at or below the poverty level with a winter coat. In 2011, the charity collected 33,000 coats.

Dawn Breyfogle, Coats for Kids chairperson for the Austin Junior League, said as of Wednesday afternoon 31,000 coats have been collected that the organization will distribute Saturday.

Randy Allen, communication director for the Salvation Army in Austin, an international charitable organization, said the number of homeless individuals may increase during the holiday season, but it is a year-round issue.

Allen said the holiday season inspires people to give back, especially during November, December and January.

“People have a greater spirit of giving,” he said. “I know I do.”

During the fiscal year October 2010 to September 2011, the organization moved 843 individuals to stable housing.

“We’re ‘doing the most good’ and so are the other organizations, obviously,” Allen said. “We all want to, by and large, because we want human beings to be treated with dignity.”

He said charitable organizations like the Salvation Army will continue as long as they are supported by donors.

“Our business of caring for people will always exist as long as the funding is there, and that depends on the hearts of the faithful,” Allen said.