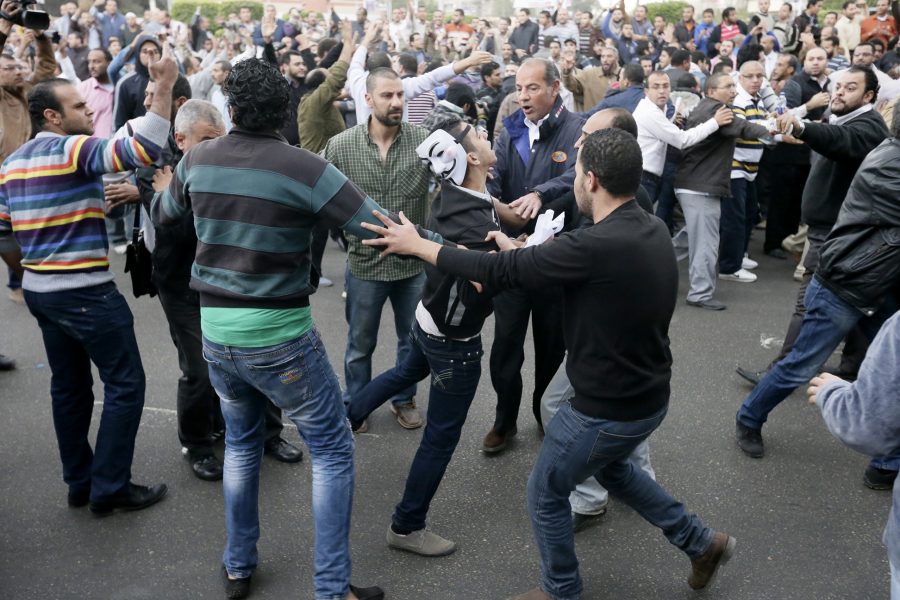 Egyptian President Mohammed Morsi’s supporters, background, and opponents, foreground, clash outside the presidential palace, in Cairo, Egypt, Wednesday, Dec. 5, 2012. Wednesday’s clashes began when thousands of Islamist supporters of Morsi descended on the area around the palace where some 300 of his opponents were staging a sit-in. (AP Photo/Hassan Ammar)

CAIRO — Egypt descended into political turmoil Wednesday over the constitution drafted by Islamist allies of President Mohammed Morsi. At least 211 people were wounded as supporters and opponents battled each other with firebombs, rocks and sticks outside the presidential palace.

Wednesday’s clashes began when thousands of Morsi’s Islamist supporters descended on an area near the presidential palace where some 300 of his opponents were staging a sit-in. The Islamists, members of Morsi’s Muslim Brotherhood, chased the protesters away from their base outside the palace’s main gate and tore down their tents. The Islamists portrayed their attack on opposition protesters as defense of the revolution.

The clashes outside the presidential palace in Cairo’s Heliopolis district marked an escalation in the deepening crisis. It was the first time supporters of rival camps fought each other since last year’s anti-Mubarak uprising, when the authoritarian leader’s loyalists sent sword-wielding supporters on horses and camels into Cairo’s Tahrir square in what became one of the uprising’s bloodiest days.

The large scale and intensity of the fighting marked a milestone in Egypt’s rapidly entrenched schism, pitting Morsi’s Brotherhood and ultra-conservative Islamists in one camp, against liberals, leftists and Christians in the other. The violence spread to other parts of the country later Wednesday.

Compounding Morsi’s woes, four of his advisers resigned, joining two other members of his 17-member advisory panel who have abandoned him since the crisis began.

The opposition is demanding that Morsi rescind the decrees giving him nearly unrestricted powers and shelve the controversial draft constitution the president’s Islamist allies rushed through last week in a marathon, all-night session shown live on state TV.

The huge scale of the opposition protests has dealt a blow to the legitimacy of the new charter, which opponents contend allows religious authorities too much influence over legislation, threatens to restrict freedom of expression and opens the door to Islamist control over day-to-day life.

If the referendum goes ahead as scheduled and the draft constitution is adopted, elections for parliament’s lawmaking lower chamber will be held in February.