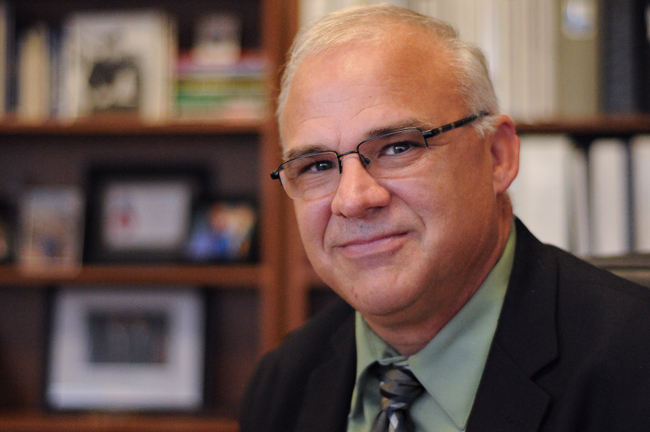 Chief of UTPD Robert Dahlstrom will be retiring in May after serving as head of the department for 6 years.

The search is on for a new University of Texas Police Department chief after the current chief, Robert Dahlstrom, announced he will retire this May.

Bob Harkins, associate vice president for campus safety and security, said the University is putting together a search committee to look for Dahlstrom’s replacement. Dahlstrom has served as UTPD chief since March 2006 and was with the Austin Police Department in multiple positions for 28 years before that.

Dahlstrom said he has been on-call with his work since the early 1990s, when he became a part of APD’s SWAT team. He said he is looking forward to relaxing in his retirement and spending more time with his family. His wife retired in May, and he has two married children who are both Texas A&M alumni and two grandchildren, who are two and six.

He said he and his wife have special plans for after his retirement.

“We made a bucket list together,” Dahlstrom said. “My wife and I really want to travel the U.S., all 50 states, and see all 254 county courthouses in Texas.”

Dahlstrom said he and his wife are fascinated by nature, Texas and U.S. history. Their planned stops during their travels around the U.S. will include Yellowstone National Park in Wyoming and the USS Arizona Memorial at Pearl Harbor in Honolulu, Hawaii. He said his time at the department has meant a lot of hard work and some difficult times, most notably Sept. 28, 2010, when a student fired shots outside the Perry-Castañeda Library and later died by suicide.

“That was definitely the most stressful day,” Dahlstrom said.

He said, however, the good days have greatly outweighed the bad, and he will miss many things about his job.

“I think the people are what I will miss most,” Dahlstrom said.

Harkins said Dahlstrom has helped the department strengthen relations with neighboring departments, overseen multiple UTPD accreditations and led the way on many UTPD initiatives including the Citizen Police Academy. The academy aims to give the public a better understanding of UTPD.

“He is a rare individual,” Harkins said. “He cares about people. He has got a tremendous capacity to outreach and to find solutions to problems.”

Dahlstrom has been recognized for his work dozens of times throughout his career through awards including the Austin National Association for the Advancement of Colored People Professional Service Award, the “Peacemaker of the Year” award from the Dispute Resolution Center of Texas and the 2012 Chief of the Year award from the University of Texas System.

Printed on Friday, December 6, 2012 as: UTPD chief to retire; replacement search on