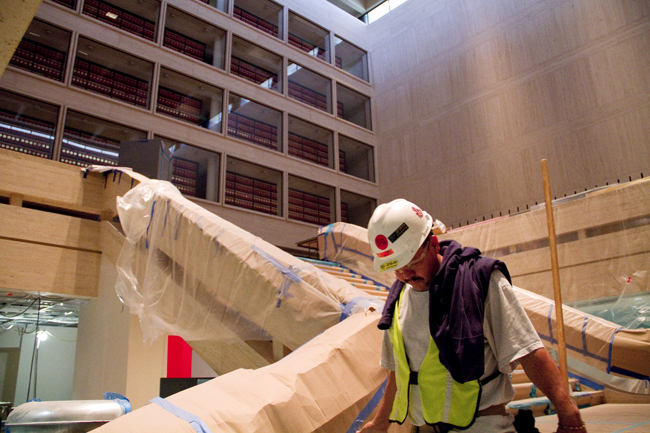 A construction worker carries supplies down the staircase in the Great Hall of the LBJ Presidential Library. The library is in the final phase of a major redesign and will reopen on Dec 22, which would have been Lady Bird Johnson’s 100th birthday (LBJ Library photo by Lauren Gerson).

The Lyndon B. Johnson Presidential Library is getting a new look later this month — and it is coming with a price.

Mark K. Updegrove, LBJ Library director, said the redesign of the library will provide context to legislation passed during the Johnson administration.

“Our goal is for visitors to better understand this largely misunderstood president,” Updegrove said in a statement. “Exhibits will explore all aspects of Johnson’s presidency, including the Vietnam War. President Johnson insisted that the LBJ Library present an unvarnished look at his Presidency — the triumphs and the turmoil. Now we share this story with new generations.”

During the design of the new exhibit, the library consulted with historians in order to ensure both accuracy and independency.

Some of the new features include access to previously-unavailable private telephone calls, an interactive decision-making Vietnam exhibit and more social media interactivity.

“President Johnson wanted the Library to use the best technology available, giving visitors a comprehensive, engaging experience,” Larry Temple, chairman of the LBJ Foundation, said in a statement.

Along with never-before-heard audio, the library is also now offering new videos on the Johnson administration.