Manziel and Te’o neck and neck into the finish, leaving voters with interesting decision. 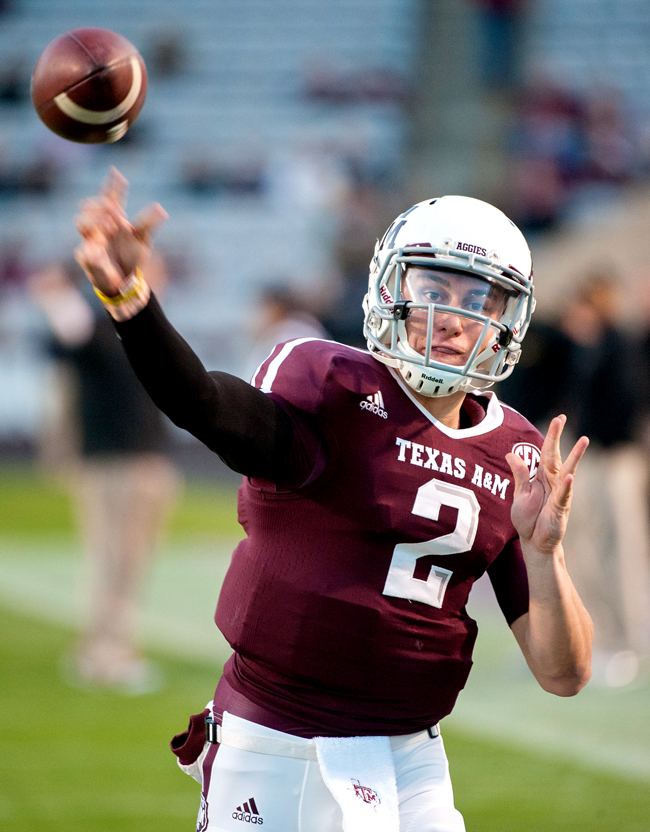 Texas A&M redshirt freshman quarterback Johnny Manziel is one of three finalists for the Heisman Trophy, along with Kansas State quarterback Collin Klein and Notre Dame linebacker Manti Te'o. If he wins it, Manziel would become the first freshman to ever win the Heisman.

Johnny Manziel, RS Freshman QB, Texas A&M
Last Week: 32-for-44 (73 percent) for 372 yards three TDs and one interception. 12 rushes for 67 yards (5.6 yards per rush) and two TDs.
Season: 273-for-400 (68 percent) for 3419 yards 24 TDs and eight interceptions. 184 rushes for 1181 yards (6.4 yards per carry) and 19 TDs.
Manziel has done what no one else has done since Adrian Peterson in 2004. He is almost assured to become one of the top two in the final Heisman ballot as a freshman. The Heisman Trophy goes to the most outstanding player in the country, but there have always been some unwritten rules. No one besides Archie Griffin has won it twice, freshmen and sophomores don’t win it and defenders aren’t eligible. One of those taboos was snapped five years ago when Time Tebow won the award in his first season as a starter as a sophomore on a 7-5 team. Since then, two additional sophomores have won the award. Manziel could take that one step further to become the first freshman to win the award. If he does, people will then be waiting to see who becomes the first true freshman to win the award.

Manti Te’o, Senior LB, Notre Dame
Last Week: Five tackles and one interception
Season: 101 tackles and seven interceptions
Another taboo could be snapped Saturday. Charles Woodson won the award in 1997 as a defensive back who also saw playing time on special teams. No other player playing exclusively as a defender has won the Heisman. Te’o could change that. While Manziel will be bringing flashiness to the award, Te’o will bring all the values you could want from a collegiate athlete. He is a senior leader of an undefeated team who plays for all the right reasons and represents the game as a high-character guy. Were he the quarterback at Notre Dame, this wouldn’t even be close. Manziel and Klein have put together nice seasons, but Te’o being the complete leader of Notre Dame, one of the most storied programs in the nation, would give him the edge. Why should the fact that he is a linebacker make this any different?

Collin Klein, Senior QB, Kansas State
Last Week: 8-for-14 (57 percent) for 184 yards for one TD and one interception. 23 rushes for 103 yards (4.5 yards per rush) and two TDs.
Season: 180-for-272 (66 percent) for 2490 yards 15 TDs and seven interceptions. 194 rushes for 890 yards (4.6 yards per rush) and 22 TDs.
The one-time Heisman leader has seen his position be split by a freshman and a linebacker. He may be a finalist, but he seems to have fallen to those two as the award ceremony has gotten closer and closer. He led his team to the Fiesta Bowl as Big 12 champions. But he did not lead his team to the national championship. Manziel did not do that either, but he beat one of the teams in it (after appearing to stop them from being in it) and doing it with much more impressive plays. Klein is reliable and has proven his abilities over the past two seasons. But being reliable isn’t enough. He had to be oustanding. And while the team performances often were, he wasn’t. Manziel has been making more exciting highlight plays while Klein has been rushing for two-yard touchdowns. That loss to Baylor put his campaign in a hole that he could not rush out of.