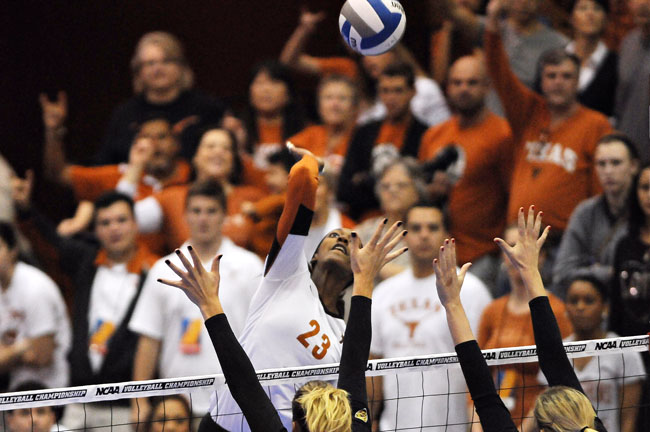 Hung upon a wall inside Darrell K Royal Texas Memorial Stadium is a glass case filled with volleyball paraphernalia. Photos, flyers and a burnt orange “Point Texas” sign flashes the pride of Texas’s award-winning program to anyone passing by.

A thunderous crowd adorned in burnt orange brought that pride to life Saturday as Texas swept USC 3-0, stuffing Gregory Gym to its brims, muffling even the sounds of the announcer’s voice with deafening cheers as the Longhorns defeated the Trojans to earn their spot in the Final Four.

Bailey Webster led the Longhorns with 17 kills, while Hannah Allison added 45 assists in a shining night for Texas.

“We were very efficient tonight,” head coach Jerritt Elliott said. “We had some great play from everyone, great balance, our defense was very solid tonight and getting our middles involved was very important. We were just consistent the entire night.”

An athletic, composed USC started the first set with a kill. Sha’Dare McNeal’s early kill launched a spree of cheers, upping the score to 4-3 as USC whacked the ball out of bounds. Texas began to pull away in the middle of the set as Bailey Webster killed the ball, while Sarah Palmer’s valiant efforts to keep the ball in bounds played in Texas’s favor. The crowd rose, horns up, as Texas finished off the set, 25-19.

Texas battled in set two point by point, clinging onto a lead in a set that included 11 tie scores and five lead changes. USC earned the first two points of the set, but a block by Molly McCage and McNeal tied the score. The ties were laced throughout the set as Webster launched a kill to tie it at 13-13, while Eckerman’s kill brought it to 14-14. USC’s Samantha Bricio’s kill tied the score again at 20-20, but the Longhorns pushed ahead and concluded the set at a close 25-22.

Fresh from the locker room, Webster killed the ball early in the third set, but USC held an early lead. McCage’s kill tied the score and Bell’s powerful slap overwhelmed the Trojan defense and brought the score up in Texas’s favor. It was Webster who dominated the set, powering 17 kills throughout the match. Texas continued to hold onto the lead and pull away from the Trojans, ending the set, 25-14.

For Texas, a win in this game means a ticket to the final four tournament in Kentucky, one step further than their journey took them last year. Texas lost to Penn State in the NCAA semi-finals, closing the book on dreams of a national title. But that was last year.

“I’m really excited about [the final four],” Webster said. “It’s a great feeling especially with a game like this. Even when I was on the sideline I was just amazed.”

Elliott said this win commemorates the dedication and steadfastness of his team members throughout the season.

“We have a goal,” he said. “There’s going to be four teams left here that have that goal, and we’ve got to be able to play well. I like the mentality that we have. We’ll go out and give our best shot and represent this university well.”