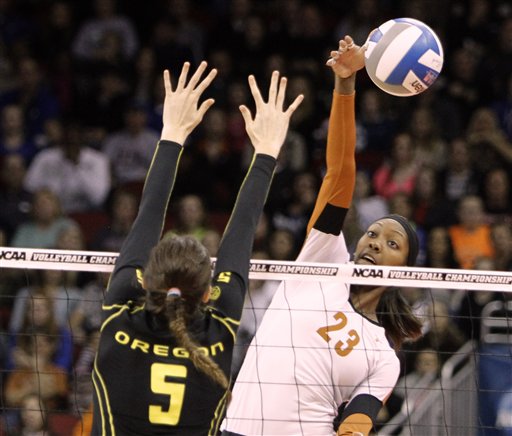 LOUISVILLE, KY – The Longhorns looked like Champions as they defeated No. 5 Oregon in three straight sets Saturday night at the KFC YUM! Center (25-11, 26-24, 25-19). The Longhorns were crowned the 2012 NCAA Division I National Champions with the victory over the Ducks. This is the second NCAA national title for the Longhorns, the first coming in 1988.

“This has been a long time coming. And I’m so happy for the University of Texas,” said Texas head coach Jerritt Elliott. “But to see these girls’ faces…We’re just so excited and proud of these ladies.”

The Longhorns finished their season 29-4 with a Big 12 conference record of 15-1.

As a team, the Longhorns hit .428 in three sets and turned in 43 kills with only four errors. The .428 hitting percentage is a record for three-set matches in the NCAA finals. In addition, Texas hit a combined .360 against both Michigan and Oregon, another NCAA record, with 108 kills and only 19 errors.

In set one, the Longhorns got out to a fast start. They cruised to an easy 12-4 lead which quickly extended as the Ducks were never able to keep up. The Longhorns posted a powerful offensive attack which was helped along by numerous Oregon errors. Texas picked up the first set easily, 25-11.

The Longhorns turned in 11 kills and only one error while posting a .400 hitting clip. The Texas defense produced seven blocks in the first set alone and held the Oregon offense to only nine kills with a staggering 12 errors. The Ducks were also held to -.083 hitting clip in the opening set.

The second set was typical for the Longhorns. The Ducks got off to a quick start, maintaining a slight lead throughout the set. A kill by junior Bailey Webster tied the set at 23-23 and a service ace by sophomore Haley Eckerman pushed it to a set point. Oregon tied it up again, before back-to-back kills by Webster, with assists from junior Hannah Allison, ended the set 26-24 in favor of the Longhorns.

“We were like: ‘Guys, like we need this win. Act like we’re about to get eliminated. We need this win,” Webster said about bouncing back after a difficult second set. “We literally took it one point at a time. I think that’s what worked for us.”

With the 2-0 match advantage after the break, the Longhorns were looking to end the match after three sets. Oregon kept the set close with a score of 9-6 in favor of the Longhorns, but Texas extended the lead and pushed it to 23-19. A  kill by senior Sha’Dare McNeal brought up the match point at 24-19. A block by Allison and sophomore Khat Bell ended the set, and the match, at 25-19.

In the third set, the Longhorns hit .387 with 13 kills and one error. The Texas defense turned in seven blocks and held the Oregon offense to a hitting percentage of .205 with 16 kills and eight errors.

Webster was named the tournament’s most outstanding player. Webster, Allison, Eckerman, and McNeal were named to the all-tournament team. Webster had 14 kills in the final match with a hitting clip of .500. Eckerman hit .400 with 12 kills. Freshman Molly McCage had an outstanding night on defense, turning in eight blocks.

Texas has the fourth-best winning percentage in history at .724.

“All I remember and all I know about this match is that I just felt like we did the whole thing together,” Webster said. “I think we really won this because we were such a team out there.”