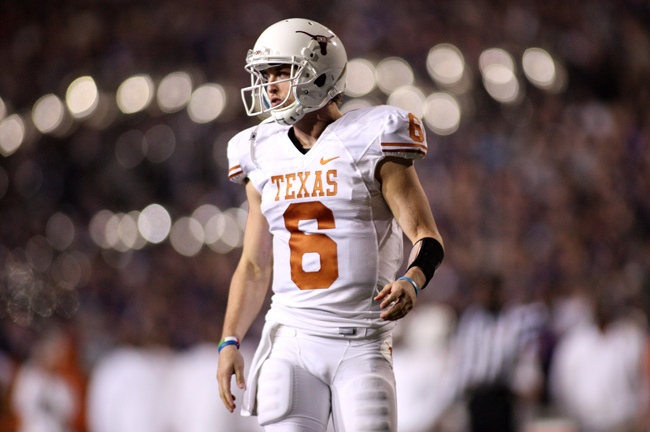 Quarterback Case McCoy and linebacker Jordan Hicks were suspended by head coach Mack Brown and ordered home Friday from the Valero Alamo Bowl in San Antonio, according to multiple reports.

The move came hours after San Antonio police were dispatched to an undisclosed location — reportedly a downtown hotel separate from where the Longhorns are staying — at 2:49 a.m. after receiving a report of an alleged rape. The report identified the suspects as Texas football players, with the first suspect described as a 20-year-old black male, 6-foot-2 and 235 pounds, and the second as a 21-year-old white male with brown collar-length hair and 6 feet tall.

According to the police report, the 21-year-old woman who filed the charges was crying when officers arrived on the scene and said she was drinking with the two suspects at the hotel bar before inviting them back to her room, where she says she was raped. The woman was taken to a hospital with bruising on her knee and bicep.

Brown would not give the names of the accused while addressing reporters Friday, only saying "they broke team rules." Brown would not say when the Longhorns' curfew was, or whether they had one at all.

Attempts to reach McCoy on his cell phone Friday afternoon were unsuccessful. The younger brother of former Texas quarterback Colt McCoy was the Longhorns' No. 2 quarterback this season, with one start. Hicks has missed most of the season with a hip and groin injury and wasn't going to play in the Alamo Bowl. Both players are juniors.