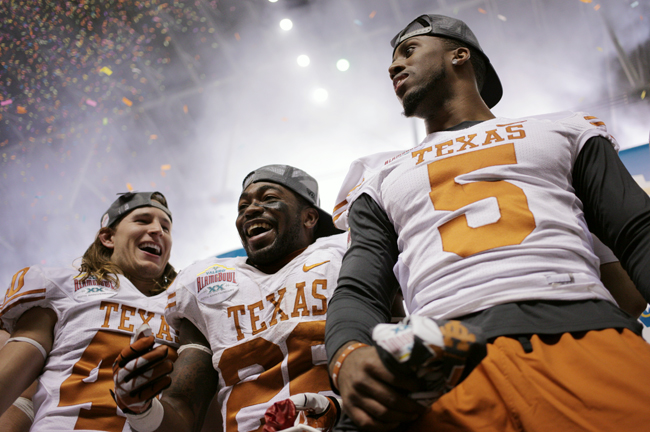 Texas players celebrate after the Longhorns 31-24 victory over Oregon State.

Alex Okafor stood atop the winner’s platform on the 50-yard line of the Alamodome, and his smile said it all.

Even as hundreds of colored balloons streamed from above and Texas players jumped around in child-like euphoria, it was the toothy grin of Texas’ senior leader that showed just how much the Longhorns’ last minute, 31-27 win over Oregon State meant.

The victory, at the Alamo Bowl, is only Texas’ ninth of the year, but it signified so much more. No, it does not mean the Longhorn program back to prominence. But it is a huge stride in the right direction.

Texas was ready to make the move forward against TCU and Kansas State, but on a Saturday night, only a few hours away from Austin, a young Longhorns squad inched towards where it wants to be.

“We told the guys at halftime ‘This is what we need, we need a tough win against a top team to get back into the mix where we get confidence,’” Brown said. “This was a really huge win for us.”

It didn’t look like it’d for the majority of the game. Not even close.

The Beavers dominated the first half, and outside of a 64-yard scamper by Marquis Goodwin on a reverse, the Longhorns only gained 59 yards on offense. It wasn’t much better for the defense either, as Oregon State gashed the Longhorns on the ground.

However, something sparked in the second half.

Ash struggled early on in the game. He looked out of sorts, came up short on throws and never looked comfortable in the pocket. But in the third quarter he found a rhythm, and that started with his legs. Ash, who had only run for 119 yards and one touchdown all season, began to scramble in the third quarter, and it paid off.

After a Quandre Diggs interception, Ash marched Texas down the field for a touchdown, capped off by an 11-yard scamper by Ash.

The run put Texas within three points of the lead and helped swing the momentum of the game.

“When you’re struggling you have to wait for the play that sparks,” Ash said. “And in this game we started getting them.”

However, the Longhorns comeback never truly engulfed until another bit of magic by Ash, this time with his legs and his arm.

With eight minutes remaining in the fourth quarter, Texas found itself, once again, down by 10. The Longhorns drove the ball into the Beavers’ red zone, but on third down things went amiss.

The pocket protection that had allowed the Longhorns to steer the ball deep into Oregon State territory started to break down, forcing Ash to scramble in the backfield to keep the drive alive. It was in that controlled chaos that Ash slipped out of a would-be tackle and rolled to his left, lofting a pass to a streaking Johnathan Gray in the end zone, where it landed softly in his hands.

“I think at that point you just start reacting,” Ash said. “It’s not really designed that way, just kind of happens that way.”

Ash’s instincts propelled the Longhorns. But it was the defense, specifically the pass rush that kept the Longhorns afloat during the scoring lulls.

During the preparation for the bowl game defensive coordinator Manny Diaz saw a weakness in the Beaver protection in passing situations, something the Longhorns exploited to the fullest.

Texas recorded an eye-popping 10 sacks, and made Beaver quarterback, Cody Vaz’s night miserable. Vaz, who had only thrown one interception all season, threw two in the loss. He looked flustered in the pocket, and never found his rhythm.

Okafor was the biggest reason why.

The senior lived in the backfield, causing havoc with every step. Okafor recorded an Alamo Bowl-record four-and-a-half sacks. He beat the Oregon State left tackle around the edge, on the inside with swim moves and even went straight through him on occasion. He was nothing short of a force. Okafor seemed at a loss for words to describe the moment saying simply, “I just kind of got in the zone.”

Okafor’s pass rushing ability sealed the game, but a connection between Ash and Goodwin won it.

With less than three minutes remaining and Texas down by three, the Longhorns finally converted a deep strike. Marquis Goodwin, an Olympian with elite speed, broke off a double move that left him nothing but open space and the end zone in front of him. And when Ash needed to make a throw the most, he delivered.

“It was a setup all game, Goodwin said. “They bit on the double move and I escaped him, Ash threw and great ball, and touchdown.”

The throw sealed the Longhorn win, and gave a young team momentum entering next season.

But for the seniors like Okafor, Goodwin and Kenny Vaccaro, the win meant so much more.

“[Strength Coach] Coach Cross had a good mention this morning in chapel,” Vaccaro said. “It was our job to get them [the team] to the Promised Land. He said ‘Moses got them to the Promised Land and Joshua took him through. And that’s what is left for these young guys to do.”