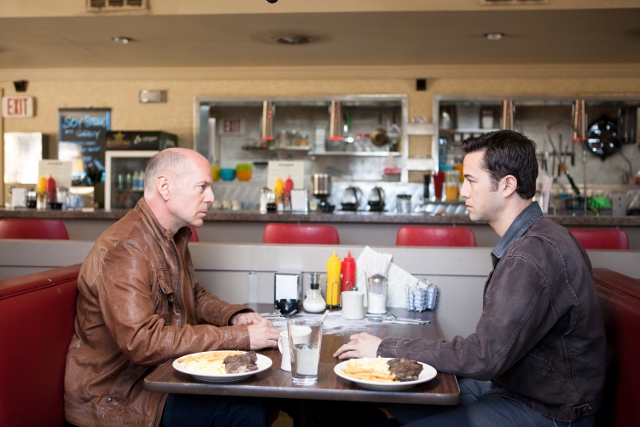 The first film I saw in 2012 was Joe Carnahan’s riveting “The Grey,” and the last was Gareth Evans’ action masterpiece “The Raid: Redemption.” In between, an extremely rewarding year of cinema unfurled across big screens in dark, crowded rooms. Moviegoers were treated to a barrage of exceptional films, with accomplished work from established filmmakers and promising debuts from fresh new voices. Not to mention the year’s preposterous amount of great performances, remarkable moments in disappointing films (I’m looking at you, “Prometheus”), and a ridiculous number of irresistibly watchable (and rewatchable) movies.

2012 was simply too stacked to keep my list to 10, so I’ve also added 15 Honorable Mentions; films that easily could have made my list in a weaker year, and that remain exceptional nonetheless.

The Avengers – Marvel pulled off an unprecedented storytelling gamble with “The Avengers,” and the result was a thrilling, endlessly rewatchable superhero triumph.

Bernie – Richard Linklater’s dark comedy was exceptional for its creative approach and an unexpected mannered performance from Jack Black.

The Cabin in the Woods –Drew Goddard and Joss Whedon’s deconstruction of the horror genre is hilarious, creative, and extremely satisfying.

God Bless America – Bobcat Goldthwait’s self-righteous rant of a film stumbles on occasion, but that doesn’t make its message any less essential.

Holy Motors – The last film cut from my top 10 was this squirmy conceptual oddity, an ode to all levels of cinema and a beautiful showcase for lead actor Denis Lavant.

Lincoln – Daniel Day-Lewis is the obvious standout in Spielberg’s latest, but a tough, unsentimental script from Tony Kushner and a massive ensemble bolster the film.

The Raid: Redemption – No action film this year came close to the bone-crunching efficiency of Gareth Evan’s masterful beat-‘em-up.

Skyfall – Sam Mendes and Roger Deakins gave Bond new relevance (and the franchise some of its most indelible images) with this standout addition.

10. Sound of my Voice – Brit Marling co-wrote and stars in “Sound of my Voice,” an intriguing, low-key sci-fi yarn. Marling stars as Maggie, the leader of a cult who claims to be from the future, and she’s an assured presence, playing Maggie not as a deity, but a hypnotic yet recognizably human figure. Collaborator/director Zal Batmanglij builds tension mercilessly throughout, finding the sinister in the seemingly harmless, and “Sound of my Voice”'s deliciously ambiguous finale is one of the year’s great question marks.

9. Argo –Ben Affleck becomes one of Hollywood’s most reliable, interesting filmmakers with “Argo,” his best work yet. Affleck stars as Tony Mendez, an exfiltration specialist brought in to rescue a handful of diplomats during the Iran hostage crisis by passing them off as a production crew for a science fiction film. Scott McNairy, Bryan Cranston, and John Goodman are all memorable in supporting roles, and Affleck does understated but earnest work. Behind the camera, Affleck walks a delicate tonal tightrope, satirizing Hollywood with deft, wry humor, and then cranking up the tension for a gripping finale.

8. Moonrise Kingdom – Wes Anderson’s greatest skill is how he reveals his characters’ personalities through his film’s aesthetics, and “Moonrise Kingdom” is perhaps his best film to date. Jared Gilman and Kara Hayward are deeply charming as two headstrong children who have run away from home together, and its their chemistry and awkwardness that sells the film’s whimsical fairy tale. Anderson’s script is full of youthful exuberance, and the adults in his cast – Frances McDormand, Bill Murray, Edward Norton, and especially Bruce Willis – are all exceptional, bringing weariness, regret, and a quiet optimism to their parts.

7. Zero Dark Thirty – “Zero Dark Thirty” is a daunting film and its no-frills approach to the story of CIA analyst Maya’s (Jessica Chastain) hunt for Osama bin Laden is rivetingly told. Chastain is passionate in the lead role, uncontrollably hungry for her target and unrelenting in her hunt, and Bigelow masterfully navigates the labyrinth of her narrative with tension and grace. “Zero Dark Thirty” represents the best kind of fact-based filmmaking, a realistic look at a major American triumph that never forgets the moral grey zone our victory inhabits.

6. The Grey – Joe Carnahan’s macho emotional powerhouse strands Liam Neeson and a small group of survivors in the Alaskan wilderness, and as wolves and the elements begin to pick at them, the film becomes something of a philosophical slasher film. Carnahan stages a breathtaking plane crash in the film’s early goings, and instills the wolves with creeping menace. Even more striking is Liam Neeson’s raw, complex performance, which skillfully blends the badass action hero with the skilled thespian to devastating, powerful effect.

5. Killer Joe – William Friedkin’s adaptation of Tracy Letts’ play is a necessary evil, its sweaty, sleazy aesthetic equally responsible for its NC-17 rating and considerable entertainment value. Matthew McConaughey’s performance as the titular Dallas cop, hired to bump off the matriarch of a dysfunctional family, caps off an incredible year for the actor, reappropriating his silky charm into something much more predatory. “Killer Joe” shines in its merciless finale, especially in its perfectly timed ending, an ellipsis on the page that becomes an exclamation point onscreen thanks to the reckless abandon Friedkin and his cast bring to the material.

4. Take This Waltz – Few films can make a lead character like Margot (Michelle Williams, a happily married woman who falls for her neighbor, and make her relatable. However, “Take This Waltz” is so wonderfully observant and beautifully detailed, and Williams (giving the year’s best performance) reflects every wave of anxiety, desire, and regret so aptly that it’s impossible not to feel for her. The nuance and wisdom in Sarah Polley’s writing and direction set “Take This Waltz” apart, and the level of understanding and empathy she lends to her characters and their lives establish Polley as a masterful storyteller.

3. Cloud Atlas – The year’s most ambitious film by a mile, “Cloud Atlas” unfurls half a dozen narratives at once, each edit timed to heighten suspense or draw a parallel, to breathless, dizzying effect. An unprecedented feat of storytelling, “Cloud Atlas” is an epic work of genuine, touching optimism, and its steadfast belief in humanity’s basic goodness is inspiring and uplifting. The film’s ensemble plays six roles each, and Jim Broadbent’s easy, befuddled charm and Doona Bae’s heartwrenching serenity sell the film’s biggest emotional wallops. The Wachowskis and Tom Twyker gambled big with “Cloud Atlas,” and the result is an unapologetic masterpiece.

2. Django Unchained – Quentin Tarantino’s newest is easily one of the most unabashedly entertaining works he’s ever produced, even as Tarantino dips into yet another controversial historical well. The film tramples through very sensitive territory, but it’s the skill with which Tarantino mixes the ugly with the spectacle, the tongue-in-cheek with the horrifying, that makes “Django” such a blast. Jamie Foxx gives an intense, understated performance, while Christoph Waltz does multi-faceted, surprising work. Plus, there’s a trio of great villainous turns from Leonardo DiCaprio, Samuel L. Jackson, and Walton Goggins playing some of Tarantino’s most vivid, compelling characters.

1. Looper – My favorite film of 2012, has a spectacular ensemble doing distinct, engaging work. First and foremost is Joseph Gordon-Levitt, disappearing into his challenging role of a futuristic hitman tasked with the murder of his older self (Bruce Willis). The sympathetic Emily Blunt and Pierce Gagnon lend the film’s second half vital emotional weight, and Jeff Daniels is smarmy and hilarious as a crime boss. But what makes “Looper” the year’s best film is Rian Johnson, Hollywood’s new smartest guy in the room. His screenplay is rife with intellectual and emotional complexities, and his direction stages pivotal moments with genuine cinematic flair. Johnson mixes originality, intelligence, and plain great storytelling to make “Looper” the year’s best film.