New Liberal Arts Building grades out as a gem 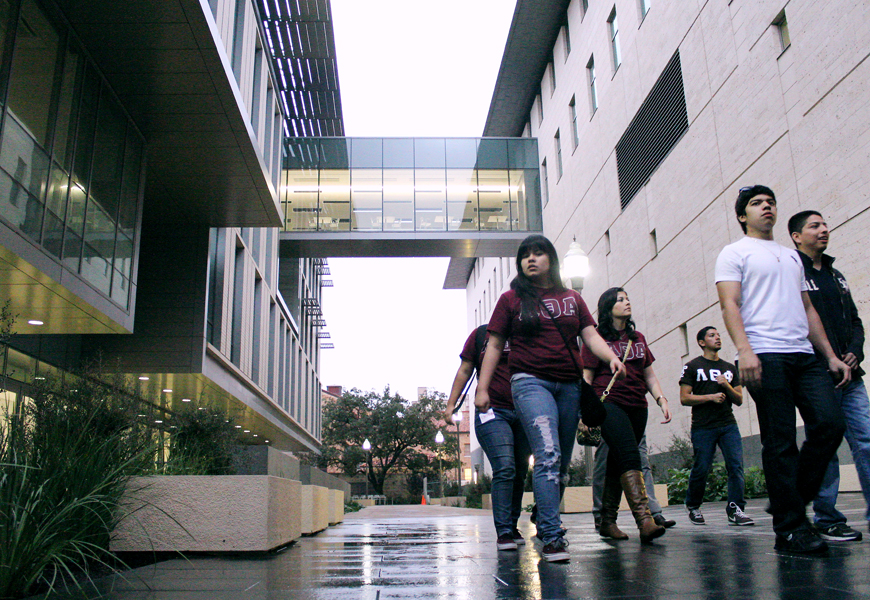 After almost 80 years of being scattered across campus, liberal arts students finally have a space of their own in the new Liberal Arts Building.

Although final calculations are still being made, the building’s cost is projected to be $87 million, less than the project’s initial expected cost of $100 million. In addition to coming in under budget, the building also contains roughly 16,000 more usable square feet than originally planned and is expected to receive LEED Gold Certification from the U.S. Green Building Council. Designers originally aimed for a Silver Certification.

The new building, a 200,000 square-foot glass and limestone structure attached to the Student Activity Center, will house several departments within the College of Liberal Arts. The college has not had its own building since UT’s first permanent building, Old Main, was torn down in 1935.

Beyond bringing the College of Liberal Arts together, the new building also represents a fiscal first for UT. The college financed the construction project itself without funding from the state Legislature or UT System. The College borrowed approximately $42 million, just less than half of the total cost for the project, by issuing bonds. The College also received an additional $22 million in donations, $18 million from University administration and spent $5 million in cash balances.

Because the construction of the project coincided with an economic recession, the college benefited from low interest rates and construction costs. Additional funds came from the American Recovery and Reinvestment Act of 2009, which was the stimulus package passed by Congress.

Jamie Southerland, the college’s assistant dean for business affairs, said the college began to make internal budget cuts in the fall of 2010, including lowering the TA and lecture budget, which happened alongside budget cuts from the Legislature. Southerland said these cuts were necessary in order to ensure the long-term success of the liberal arts program.

“We had no space left for new faculty and no research space,” Southerland said. “That made it impossible to recruit.”

“Because the College of Liberal Arts was actually paying for a significant proportion of the budget, we all kept in mind that every dollar we could save was another dollar we could spend on our instructional budget,” TenBarge said.

TenBarge attributed the savings to the intense levels of coordination and planning that occurred at every stage of the building process. TenBarge said the architecture firm, Overland Partners, worked together with the construction company, Spawglass, to create a mock-up used to troubleshoot for problems that typically occur during the construction process.

“The mock-up was expensive to build, but it was an important part of the planning process,” TenBarge said. “It was an odd collection of all the details that we ultimately included in the building, and it allowed us to see details like how a certain concrete edge should be shaped, or how a particular piece of glass would ultimately fit into the metal.”

Architects also reached out to faculty members in the college to pre-empt any possible issues. Stacey Amorous, associate director of the Liberal Arts Honors program, said its faculty had input on everything from the size of the computer lab to the opacity of the glass that would surround their offices. Amorous said she appreciated the level of planning and detail.

“So much time and attention went into this project, and I think it’s absolutely fabulous,” she said. “We all felt like our requests were heard.”

TenBarge said the coordination between the college and the architects was largely unprecedented. He said the budgetary success of the project will influence the way UT approaches new construction projects in the coming years.

“The biggest reason [the building] came in under budget was detailed and careful planning — the architect, the builder, liberal arts and the campus team all came together to keep costs down,” TenBarge said. “Some of the strategies we used here had already been adopted in prior projects. We basically just took it to another level.”