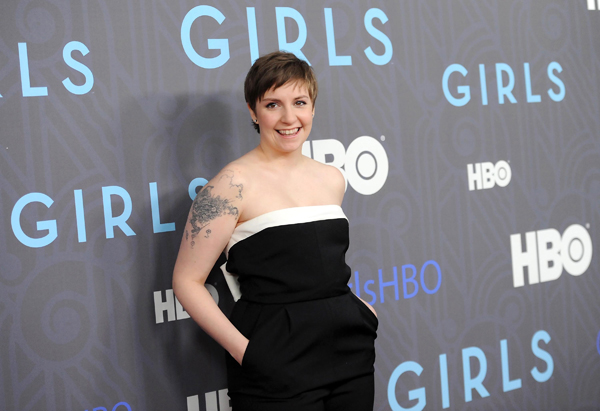 “Girls” star, Lena Dunham attends the HBO premiere of the show at the NYU Skirball Center on Wednesday in New York

Twenty-six-year-old Lena Dunham is not the slacker/wannabe writer she plays in the hit HBO series “Girls” that she stars in, created and currently directs. Although the current darling of the New York media circuit, Dunham has incurred as much criticism as she has cover photos.

While many of the critiques of the show are valid — unrealistic situations, a lack of diversity among main characters and catering to a narrow audience — criticizing “Girls” for the appearance of Dunham’s body is about as relevant as praising “Friends” for Jennifer Aniston’s haircut.

Flanked by three thin, media-approved beauties (Zosia Mamet, Allison Williams and Jemima Kirke), Dunham’s figure has been used to critique the realism of the show. God knows that Dunham could never have sex with a man like Donald Glover while Williams, who plays her “beautiful” best friend, sits forlorn on the couch.

Marnie (Allison Williams) is uptight, critical and regularly complimented for her beauty on the show. She is Dunham’s opposite both in body type and body visibility. In the premiere of season one, Marnie and Hannah (Lena Dunham) sit in a bathtub. Dunham’s arms drape over the side of the tub while Williams sits upright, tightly wrapped in a towel. “I only show my boobs to people I’m having sex with,” Marnie says.

Curiously, the audience never once sees her naked chest or behind during season one nor in the premiere of season two though she has plenty of onscreen sex. While this could be William’s reluctance to be naked on television, it doesn’t really matter. The decision is one that fits her character.

It is doubtful the media would be up in arms over seeing Williams naked anyway. The New York Post used words like “blobby” and “sloppy” to describe Dunham’s naked body, wondering why we even have to be subjected to such an imperfect figure. But the truth is that Dunham’s character is insecure and seeking approval. Hannah is hoping that by quickly shedding her clothes, she can appear more confident than her insecurity allows.

The season two premiere opens and closes with a mostly naked and unashamed Dunham. Her co-stars spend little time in equally naked situations. And that is realistic. It should no longer be a crutch that cruel and lazy writers use to critique the show. Why is it that we can accept a variety of nationalities, sexual orientations and races on screen, but not an atypical body type?

Ultimately, no one is as naked as Dunham, but that is a realistic step for the show. Hannah Horvath is not modest in season two, and honestly, we shouldn’t expect her to be.