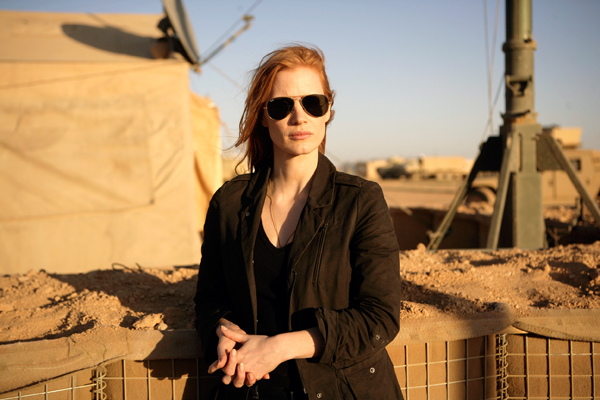 Jessica Chastain, who stars as Maya in “Zero Dark Thirty,” won a Golden Globe for Best Actress on Sunday night.

For many leading roles, especially those written for females, likability is key, and their ability to charm is pivotal to their film’s opening weekend. For Jessica Chastain, who plays determined CIA agent Maya in “Zero Dark Thirty,” getting on the audience’s good side doesn’t appear to be too difficult for one very simple reason — she’s playing the woman who caught Osama bin Laden. What’s not to like?

Taking place over the 10 years between 9/11 and bin Laden’s death in 2011, “Zero Dark Thirty” methodically lays out the puzzle pieces for Maya and other agents to assemble. It’s a no-frills approach for director Kathryn Bigelow and the film unfolds with the same unrelenting focus as “The Hurt Locker,” her Academy Award-winning last film.

Jessica Chastain gives a performance brimming with complexities, finding genuine humanity between the pages of Mark Boal’s screenplay. Maya’s determination drives her, but it’s the intelligent, infallible confidence that Chastain brings to the role that makes you root for her and her unquenchable hunger for her target that makes her a force of nature. It is a riveting achievement for Chastain and a high watermark in her quickly growing filmography.

The figures surrounding Maya in the CIA are rather thinly defined, but Bigelow intelligently fills Maya’s sounding board with familiar, likeable faces. Kyle Chandler is reliably stern but reasonable as Maya’s exhausted boss and coworkers like the excitable Jennifer Ehle and subdued Mark Strong round things out nicely. Jason Clarke stands out as a fellow torturer and he brings a resigned certainty to his subtle but effective arc.

The story of bin Laden’s capture is a challenging one, both for the scope it requires and the number of false starts and dead ends in the rabbit hole he disappeared in after 9/11. However, Bigelow makes the small accumulation of details and evidence engrossing and it’s a small victory every time Maya cracks another bit of information. Much controversy has been created from “Zero Dark Thirty’s” depiction of torture, but it’s less an endorsement than a simple acknowledgement of the moral grey area inherent to the story it’s telling. Bigelow handles the challenging material with grace and Chastain makes Maya’s acclimation to the CIA’s methods a gradual but chilling shift.

Even as Bigelow hits the audience with an onslaught of names, places and faces, she balances things out with moments of quiet levity and masterfully constructed tension. The film is beautifully paced, and its climax, the raid on Osama bin Laden’s compound, is taut with intensity and brutal efficiency. It’s a cathartic moment for both the characters and the audience and it feels like an earned victory thanks to Bigelow’s remarkable focus and sparse style.

“Zero Dark Thirty” is an exceptional film top to bottom, but it’s certainly not an easy one to love. There’s no warmth, no soaring violins when bin Laden’s body is identified, but the toughness and lack of sentimentality is admirable. The straight-on approach to the hunt for bin Laden makes the film less of a celebration and something more akin to journalism, a sharply sketched portrait of the woman who found our country’s greatest enemy.