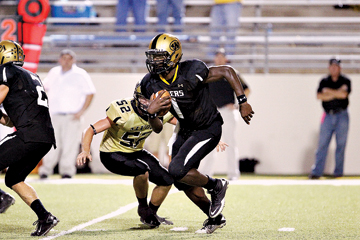 The end of the year was marred by decommitments and missed opportunities for the Longhorns’ 2013 recruiting class, despite strong showings by UT commits at end-of-the-year All-America games.

The class of 2013 now has only 13 members. Arlington Martin running back Kyle Hicks switched his commitment to TCU, and Belton tight end Durham Smythe decommitted from Texas to entertain other offers.

Although decommitments are an expected part of the recruiting process for any school, Texas has yet to fill the spots vacated by Smythe and Hicks.

Katy Seven Lakes offensive lineman Caleb Benenoch, Auburn athlete Cameron Echols-Luper and East Mississippi Community College defensive end Za’Darius Smith all recently spurned the Longhorns. Benenoch, who was once thought to favor UT, committed to UCLA Dec. 10. Marshall was offered a scholarship but committed to Auburn on Monday. Texas offered a scholarship to Echols-Luper on Thursday, but it wasn’t enough to prevent him from committing to TCU over the weekend. Smith visited Austin for the Dec. 7 Football Banquet (according to burntorangenation.com), only to commit to Kentucky Dec. 19.

Meanwhile, speculation continues that Arlington Heights defensive tackle A’Shawn Robinson may also decommit. Robinson committed to Texas on Feb. 16, but has since made visits to Florida State, Southern California and Alabama. Robinson is rated as Texas’ best 2013 commitment by rivals.com.

Nonetheless, Robinson asserted his allegiance to Texas at the 2013 Army All-American Bowl in San Antonio Jan. 5.

Bastrop’s Davis made the biggest splash of any future Longhorn. Davis broke up what would have been a sure touchdown in the second quarter, and came off the edge to block a field goal in the same drive.

The other major high school all-star game, the Under Armour All-America Game, also had a representative from Texas. Harker Heights center Darius James missed most of his senior season with a broken foot, but showed off his versatility by playing a few snaps at offensive tackle. Even so, James may not have had even the best month in his own school.

Fellow Harker Heights Knight and Texas commit Naashon Hughes, who played out his senior season expecting a grayshirt, was rewarded by the Longhorns with a full scholarship in mid-December. The outside linebacker will now start classes this coming fall.

Who else will join him in the class of 2013, however, is unclear. While potential candidates include Waco offensive lineman Andrew Billings, Hutchinson Community College outside linebacker De’Vondre Campbell and Contra Costa Community College offensive tackle Desmond Harrison, to say that any of those players will sign with Texas on National Signing Day would be shortsighted.

To be more accurate, as National Signing Day looms and the Texas coaching staff scrambles for a handful of commitments, the only certainty in this class is how much remains uncertain.