Texas volleyball squad did what everyone has been waiting for Longhorns football team to do: win a national championship 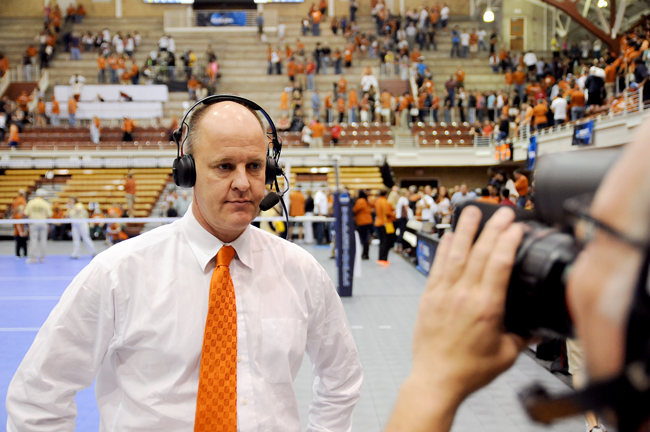 Texas volleyball head coach Jerritt Elliott may not make as much money as Mack Brown, but he is quickly becoming one of the most successful coaches on the 40 Acres. Elliott recently captured his first NCAA Title after several failed attempts and now he’s on the rise.

If Mack Brown wants to turn things around, he should take a page out of Jerritt Elliott’s playbook.

In 2009, both the Longhorns’ football and volleyball teams suffered crushing defeats in their respective national title games.

How they responded to those losses defined how the next three seasons went. Since Alabama beat a Colt McCoy-less Texas team to begin a run of three national championships in four years, Brown’s squad lost as many games in the next three years as it did in the previous 10.

Meanwhile, Elliott led his team back to the Final Four in two of the next three seasons, capturing an elusive national title last month when Texas swept Oregon in the championship match. Elliott’s team earned the program’s first title since 1988 and he was named AVCA National Coach of the Year.

The UT Tower will be lit orange with a “1” on all four sides Tuesday because of what the Longhorns volleyball team accomplished last year — what Texas fans have longed for their beloved football team to do for the last seven years: win a national championship.

“This has been a long time coming,” Elliott said after Texas’ victory over Oregon in Louisville last month. “We had a rough stretch in the beginning of the year, and trying to figure out our lineups, but we always believed. And the great thing about coaching is if you’re in it enough, you have enough experience, you can be patient because you know you’ll get it in the end … This is the best team I’ve ever had.”

Both Brown and Elliott have established themselves as masterful recruiters. Following a five-set loss to Penn State, winners of 101 straight matches entering its clash against Texas in 2009’s national title match, Elliott signed recruiting classes ranked No. 5, No. 1 and No. 2 the next three years, according to Prep Volleyball.

Each of the recruiting classes Brown signed from 2010 to 2012 was among the three best in the country, according to rivals.com. Yet Brown’s team, despite playing 59 fewer contests, lost more times (16) during that stretch than Elliott’s squad (15).

“When I took the job, there wasn’t a whole lot of rich talent coming out of there,” Elliott said. “The great thing about Texas is there’s so much pride in it and it’s going to continue to grow the sport. And I’m sure us winning tonight, we’ll get a lot of young ladies out there 10 to 12 years old start bumping the ball back and forth and hopefully some future Longhorns.”

Brown has his program on a slow and steady rise. After a 5-7 campaign in 2010, Texas won eight games in 2011 and nine last year. The Longhorns will return the vast majority of their starters on both sides of the ball next season, giving them a good chance to be the preseason favorite to win the Big 12 in 2013.

The longtime Texas head football coach has shown he knows what it takes to win a national title. But it is Elliott who has proven he knows how to bounce back from a loss in a national championship contest.

That’s why the Tower is getting lit up Tuesday.