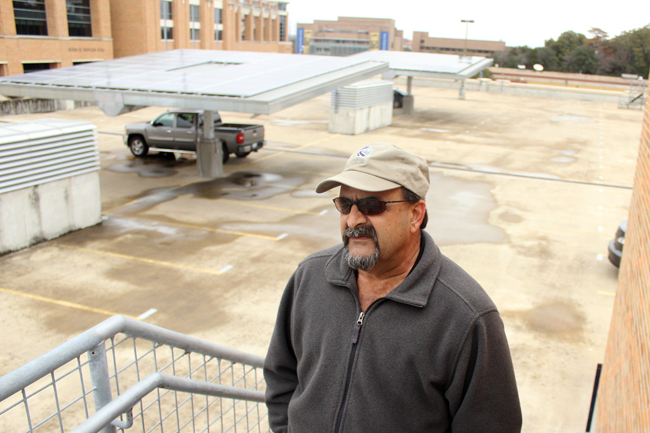 Parking Services Supervisor John Garrett stands in front of solar panels on the Manor Garage roof Tuesday afternoon. The panels were installed in 2011 as part of a study by the Webber Energy Group, a UT mechanical engineering team researching the output of three different types of panels under the same conditions.

While Austin Energy announced that it gave out more solar energy rebates to residents in 2012 than any other year, UT officials said they plan to maintain the campus’ solar panels but don’t plan to build any more.

“We want to help spur the solar energy desire in the world but to also bring the costs down,” Cordova said. “Our rebate is the lowest ever, $2 per kilowatt hour, but the desire for solar energy in Austin is at its highest ever, which has helped us achieve the high number of rebates.”

Saying he hopes to provide a clean energy future for students, Jim Walker, the University’s director of sustainability, oversaw the installation of solar paneling on the main campus and at the J.J. Pickle Research Campus in North Austin.

The J.J. Pickle Research Campus has been heralded as having the largest solar power system in Austin, consisting of two solar arrays. One is on top of a newly built carport structure and the other covers more than an acre as a larger ground-mounted system south of the Microelectronics Research Center building. By harnessing the sun’s energy, UT obtains more than 400,000 kilowatt-hours of electricity per year, according to UT Facilities Services.

“Our [main] energy source is a monofuel burning, natural gas producing plant that produces energy that is cheaper and much more efficient than solar energy,” Walker said. “Because solar energy is still quite expensive, making the campus go solar is a harder argument to make.”

Published on January 16, 2013 as "UT elects to not expand solar energy usage".