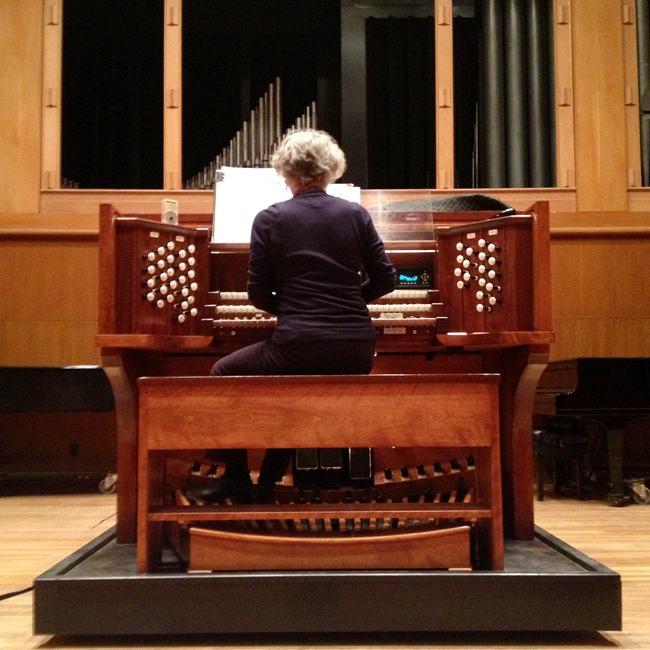 A new organ, donated by UT alumnus Robert Sherrill, is filling Jessen Auditorium with music and is being introduced to the Organ Studio Program.

The Aeolian-Skinner Opus 1393 organ was built in 1963 and previously housed in a church in Houston. It was installed in Jessen Auditorium over the fall and after its completion on Dec. 14, a dedication concert was played. The organ contains more than 10,000 different pieces.

The organ was donated by Sherrill, in honor of his late wife, Mary Elizabeth Sherril.

Douglas Dempster, Dean of the College of Fine Arts, said the new instrument will allow the organ program to expand. The program serves nine Organ Studio students and allows non-majors to use the organs for lessons.

“The program was handicapped by having only one significant organ available to students in Bates Recital Hall,” Dempster said. “The addition to Jessen Auditorium of this refurbished Aeolian-Skinner is an important enrichment of the growing program.”

Dempster said organ professors Gerre and Judith Hancock had pushed for a second instrument for several years. Gerre passed away Jan. 21, 2012 before the project was completed and was honored at the dedication concert.

“The program has grown because of the dedication and reputation of professors Gerre and Judith over the last five years,” Dempster said. “They are internationally recognized for their performance and teaching.”

“I look forward to teaching my students on the Jessen organ,” Ludwick said. “A big part of learning our instrument is being able to play on different instruments. It’s important as a professional to be able to translate what you learn on one organ to another organ and make adjustments.”

Organ master student Stephan Griffin said the Jessen organ will have the better allow organ students to work with other musicians and expand their skill set.

“This opens up opportunities for collaboration,” Griffin said. “The organ we have in Bates is positioned on a balcony, there’s an issue if you want to collaborate with two or three other players. The organ in Jessen, you’re right there onstage and you can make eye contact with other people, making it a lot easier.”

Griffin said while programs at other universities are downsizing, this addition shows UT’s commitment to the organ program.

“It’s a great addition to the program,” Griffin said. “It’s an American classic organ from a time gone by. You don’t get to play many of them anymore, so it’s amazing UT has installed one. It will attract people because you don’t have many institutions that offer an Aeolian-Skinner as a teaching and performing instrument anymore.”