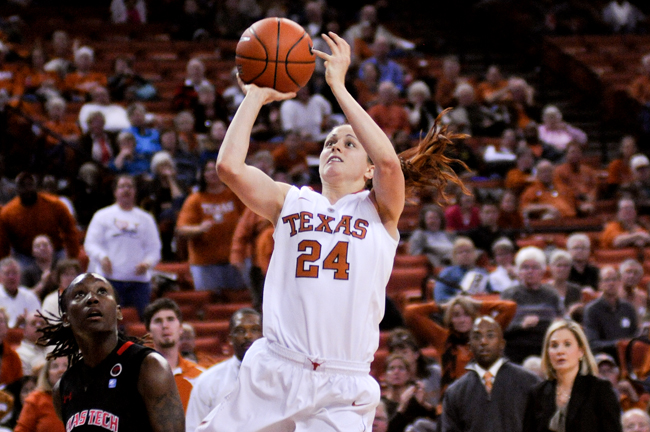 Junior Chassidy Fussell shoots against Texas Tech on Wednesday night. Fussell went 3-for-12 and 1-for-6 from beyond the arc in the 66-59 loss. The Longhorns have lost their last seven games and are 0-5 in Big 12 conference play for the first time in school history.  " />

Junior Chassidy Fussell shoots against Texas Tech on Wednesday night. Fussell went 3-for-12 and 1-for-6 from beyond the arc in the 66-59 loss. The Longhorns have lost their last seven games and are 0-5 in Big 12 conference play for the first time in school history.

In a whirlwind game from start to finish, the Texas Longhorns dropped their seventh straight contest, 66-59, to Texas Tech. The loss gives the Longhorns a 0-5 start to Big 12 play, their worst start in conference play in school history.

“We really just got to stay positive,” guard Chassidy Fussell said. “And just keep working hard in practice and staying together as a team.”

Texas looked out of sync early on as errant passes and sloppy transition defense saw the Red Raiders jump out to a 23-9 lead in the first half. Head coach Karen Aston spent most of the half pacing the sidelines as Texas Tech scored 19 of the 35 first half points off of Longhorn turnovers.

“The story of the four games we’ve played in conference play has been mistakes,” Aston said. “I think our effort and our attitude about the adversity in games has gotten so much better but the mistakes are still happening.”

The Longhorns did their best to curb the early deficit, slowing down the tempo and getting the ball inside to Nneka Enemkpali, who finished the first half with 12 points. Despite heading into the locker room down, 35-27, Aston was pleased with the team’s resiliency.

Imani McGee-Stafford gave the Longhorns a breath of fresh air in the second half, finishing the game with 20 points and 11 rebounds. In spite of her surge of energy, however, the Longhorns just couldn’t put it all together.

“I think we were working — emphasis on we,” McGee-Stafford said. “We were moving the ball, people were doing what they needed to do in offense, we were making stops, and everybody was at their man. The chips just didn’t fall.”

The loss is a disappointing one for the Longhorns, who had many chances to break the game open. The rebounding and post-play edge that the Longhorns usually enjoy was nullified by an experienced Texas Tech defense that blanketed the Longhorns all night.

“If this was an older team I’d say that effort became not enough a long time ago,” Aston said. “But a lot of the mistakes they’re making is because they’re really, really young but I don’t think they’re that stubborn. In the moment, they are making mistakes that you hope in due time they will stop making.”

They may have taken another step back in the Big 12 standings, but learning against an experienced team has Aston hopeful heading into Oklahoma this Saturday.