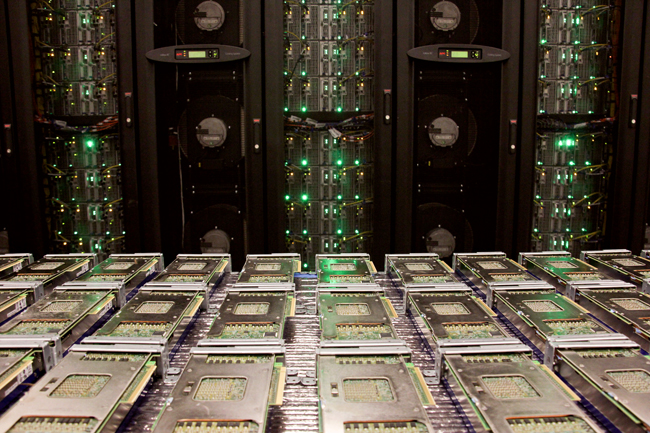 Hundreds of Xeon Phi coprocessors fill tables in the Texas Advanced Computing Center. The newly introduced coprocessor, designed by Intel, is the innovative component of the TACC’s Stampede supercomputer (behind). " />

Hundreds of Xeon Phi coprocessors fill tables in the Texas Advanced Computing Center. The newly introduced coprocessor, designed by Intel, is the innovative component of the TACC’s Stampede supercomputer (behind).

The University is trying to stake a claim as a leader in interdisciplinary science research with the recent installment of the world’s most powerful academic supercomputer at the Texas Advanced Computing Center (TACC).

The system, named Stampede, became operational on Jan. 7. The TACC staff and Dell engineers installed and tested the supercomputer during a six-month period, said Tommy Minyard, director of advanced computing systems at TACC. The National Science Foundation (NSF) funded the initial $27.5 million cost as part of its “eXtreme Digital” program and will continue to fund Stampede operations for four more years.

President William Powers Jr. said the addition of Stampede to the University’s facilities only augments its prestige as a premier research campus.

“Stampede is a game-changing supercomputer that reinforces UT’s role as a supercomputing hub and a world-class research university,” Powers said in an emailed statement. “It will help scientists solve some of the world’s most pressing problems and it will promote collaboration across campus and across the country. Jay Boisseau and the faculty and staff at TACC are at the heart of something very big.”

TACC was founded in 2001 and is located on the J.J. Pickle Research Campus, according to the TACC website. It is one of the top centers for computational science used by researchers nationwide.

Stampede’s power is derived from 6,400 Dell servers that each contain two Intel processors, according to Minyard. He said Stampede’s high-speed network means applications are able to efficiently run with many processors simultaneously.

Minyard said Stampede is available to many U.S. researchers who can apply for time on the system through the NSF.

“Most of the time is allocated to NSF researchers,” Minyard said. “However, 10 percent of the system is available to UT researchers [since UT is] hosting the system. The system will be used to solve a wide range of problems from almost all science disciplines, such as computational chemistry and physics, astrophysics, computational fluid dynamics, weather and climate modeling, computational biology, etc.”

Reuben Reyes, senior systems administrator for the Bureau of Economic Geology at the Jackson School of Geosciences, said Stampede is great to work with because of its capability to rapidly solve large problems.

“It has its advantages and disadvantages,” Reyes said. “The biggest advantage is you can scale up very complicated problems at a very high level.”

Despite the system’s ability to solve problems quickly, there are some issues with accessibility to the computer, Reuben said. He said waiting for a problem to be solved by Stampede can sometimes take longer than the solution itself.

“You’re in a queue waiting for your process to take off,” Reyes said. “Once it takes off, it’s solved really, really fast, but let’s say I need larger resources and in the queue I’m in, it may take longer for the supercomputer to get to it.”