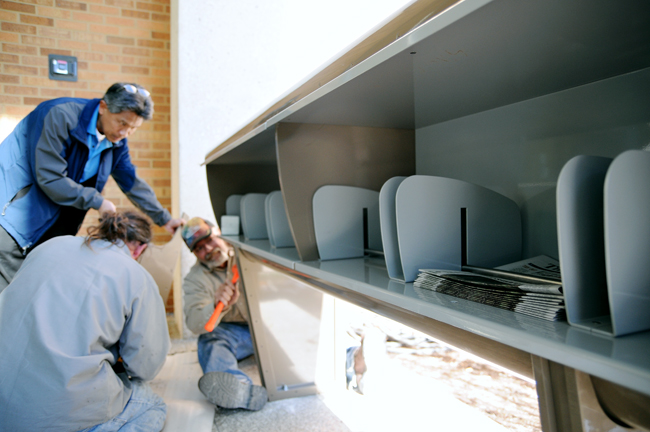 Belo Center project manager Pawn Chulavatr and workers install a newsbox outside of the Belo Center Thursday morning. The newstand will house six newpapers, including The Daily Texan, The Dallas Morning News and the Austin-American Statesman.

Notebook in one hand, morning coffee in the other, students can catch up on the news as they walk along Dean Keeton. Thanks to a new newspaper stand installed outside of the Belo Center for New Media, 8 a.m. classes just got more bearable.

The single newsstand, installed Thursday, is located at the main entrance and will hold six newspapers including The Daily Texan, The Dallas Morning News and the Austin American-Statesman, but the other three have not been determined by the College of Communication.

In September, the college denied a request by Wanda Cash, clinical journalism professor and assistant director of the School of Journalism, for Daily Texan news boxes in front of the Belo Center, where the journalism school is located. The college, which was aiming for a LEED silver certification, cited the boxes could create potential environmental concerns. The college later reversed its decision, planning to have a news box by November, after taking bids on designs to match the building. In December, the college told the Texan the box should be installed by the start of class Jan. 14.

Dean Hart said the college will also provide about 10 copies of the city newspapers for free daily.

“The whole point is to celebrate journalism,” Hart said. “We’re going to make them available at no cost, so students can pick them up in the morning. The idea is to try to stimulate people’s interest in newspapers.”

Cash said the news box will fit the needs of the students and the college by providing newspapers at the Belo Center, while maintaining the building’s sleek look with the newsstand.

“It’s great that the college responded to student concerns,” Cash said. “It will be nice to see a collective presentation of papers with one standard looking news box, fitting with the style of the building.”

Journalism lecturer Mark Morrison, who previously served as a Daily Texan editor and as a Texas Student Media board member, said the news boxes are long overdue.

“It’ll be nice to see the boxes have a permanent home in the building,” Morrison said. “I’m glad to hear they’re finally getting around to installing the boxes after the delays last semester.”

Journalism junior Olivia Suarez said the newsstands are a good addition to the building, if the entrance stays clear of newspaper litter.

“As a journalism major, I feel it’s important to have easy access to the news, whether it be print or virtual,” Suarez said. “I remember last semester, I was confused as to why the CMA had plenty of boxes, while Belo lacked them. As long as the front area remains clean, I don’t see any inconvenience to their installation.”