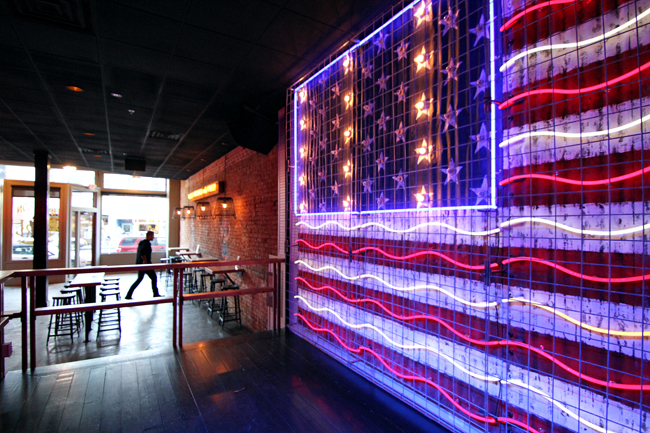 Chad Womack, one of the owners of Bourbon Girl, prepares to open the bar on 6th Street Thursday afternoon. The Bourbon Girl opened Wednesday after waiting months for Yassine Enterprises’ TABC permit to be cancelled so they could obtain one of their own.

The new permits from the Texas Alcoholic Beverage Commission, which became effective Jan. 9, were given out to the establishments that took the places of bars owned by Yassine Enterprises. Hussein Ali “Mike” Yassine, Yassine Enterprises co-owner and permit holder, was convicted of money laundering in October 2012.

The new establishments receiving permits from TABC are Bourbon Girl, 413 Bar, Chicago House and Castro’s Warehouse, according to a statement from TABC. These new bars will replace Spill, Treasure Island Pirate Bar, Fuel and Hyde, respectively, and are not affiliated with Yassine Enterprises.

Carmack Concepts, which owns Bourbon Girl in addition to bars including the Chuggin’ Monkey and the Dizzy Rooster, obtained the lease for Bourbon Girl in April 2012 but was forced to wait for Yassine’s permit to be canceled before receiving their own, Jason Carrier, owner of Carmack Concepts, said. Carrier said this delay significantly hampered the opening of their business.

“We could have opened in December,” Carrier said. “But we were at a complete standstill until we finally opened Wednesday night.”

Carrier said there should be new legislation regarding the number of TABC licenses that can be attached to a single address. Currently, only one license may be tied to each address, which can create administrative problems when original tenants have been evicted, Carrier said.

“The license becomes worthless if there’s not a valid lease attached to it,” Carrier said. “If a bar loses its lease, it should make the license null.”

Carolyn Beck, a TABC spokeswoman, said a temporary order was initially filed in March 2012 against eight of the bars owned by Yassine, prohibiting them from buying or selling alcohol on the premises until further action could be taken.

“In February or March, the FBI raided the Yassine locations, and that’s when it started,” Beck said. “It was March 22 when we filed the temporary order.”

Yassine also owned a restaurant, Stack Burger, which was placed under a similar order March 28, Beck stated in a statement. Additional suspensions were placed on the eight bars because of failure to pay taxes to the Office of the Comptroller, the statement read.

Beck said once Yassine was found guilty of money laundering, it was easier for TABC to successfully have his permits removed.

“Yassine was convicted of crimes in court, so we used that felony conviction as evidence that he could no longer maintain control of those establishments,” Beck said. “By that time, he had already been evicted for nonpayment.”

Music junior Austin Ferguson said bars that closed, such as Kiss & Fly, will be greatly missed by patrons. Ferguson said the news of last year’s money laundering scandal was surprising.

“No matter what had gone on the day/week before, we could always go downtown to Kiss and just have fun without anybody caring our judging us,” Ferguson said. “I always knew the place was a little seedy — what downtown club isn’t? But the extent of what was going on during the day shocked me.”