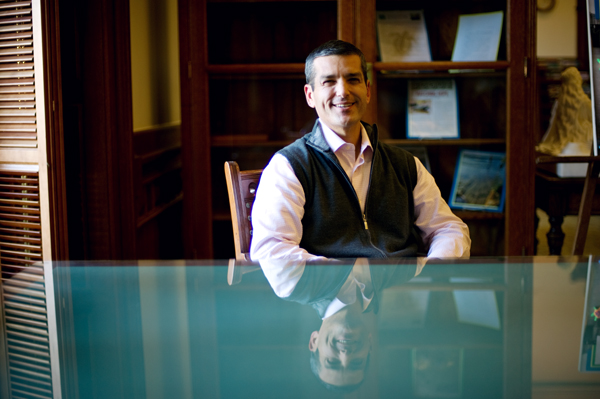 Texas House Representative Mike Villarreal, in his 7th term as San Antonio’s District 123 representative this session, is also currently pursuing his PhD at the UT Lyndon B. Johnson School of Public Affairs. His focus at the LBJ school is in education policy, and he hopes to apply that to a teaching career in his future.

Though Texas Rep. Mike Villarreal, D-San Antonio, is a UT doctoral student, his interest in supporting higher education in the legislature is rooted in years of research and a passion for supporting future generations.

Villarreal is in his seventh term as a state representative. A Texas A&M and Harvard alumnus, he is currently pursuing a doctorate in public affairs at the Lyndon B. Johnson School of Public Affairs, where he says he hopes to apply his concentration in education policy to a teaching career in the future.

“My focus at the LBJ School is on education policy,” Villarreal said. “Most of my courses are training me, honing my econometric skills, and I think from this experience I’m going to achieve my dream of teaching and writing in the areas that I legislate in.”

Aleksandra Malinowska, public policy graduate student at the LBJ School, is in the same cohort as Villarreal, and said he is a positive force both in and outside the classroom.

“He does have a perspective and so he brings it into a lot of our theory classes,” Malinowska said. “He’s able to inform us on current things that are happening. He’s always discussing about how the theory we’ve learned, he can put into practice. He’s hosted dinners at the Capitol before and he’s a truly nice person.”

After completing his master’s degree at Harvard, Villarreal said he launched a grassroots campaign in 1999 for state representative, opposing a candidate supported by previous legislators in the San Antonio area and several other members of the local political community. One major facet of his campaign involved going door-to-door passing out surveys for community members to fill out about their thoughts and needs.

“I went one door at a time for nine months,” Villarreal said. “I knocked on 4,000 doors. I lost a whole lot of weight. It was a grueling experience, but it was a wonderful community-building experience.”

On election night, Villarreal said, he won by a single vote.

During this legislative session, his agenda is focused primarily on education and tax policies as a way to invest in the future of Texas, Villarreal said.

“Number one on my agenda is to try to fight for greater investment in higher ed [sic], in public ed, but also to make some reforms,” Villarreal said. “I think that if I’m going to be an advocate saying that we need to invest more, I also need to be willing to get under the hood and figure out how to make our public institutions that deliver this service more [effective].”

Villarreal said he is proposing various education reforms, including altering the way TEXAS grants are awarded to university students and funding full days of pre-kindergarten, as opposed to the current practice of half days.

“We know that in the entire education pipeline, you get your biggest bang for your buck early on,” Villarreal said. “If you start delivering quality early education to three and four-year-olds, the costs of educating them decreases in later years.”

Villarreal said many of the policies he strives for come directly from heavily researched numbers. Jenna Cullinane, public policy graduate student, said the ability for Villarreal to take his research from the LBJ School and directly apply it to legislation is a positive connection.

“It’s really not research just for research’s sake,” Cullinane said. “It’s research with a purpose. I think the fact that he’s a legislator doing this degree is pretty great because he takes what he’s learning and can apply it directly.”

Villarreal said he is grateful for the experience of going back to school and draws personal inspiration from the students and faculty he sees when he is on campus.

“It just brings joy to be surrounded by scholars and students and walk across campus and see all the young students who are the future of Texas,” Villarreal said. “Whenever I come back from UT, I feel optimistic about the future — that we’re going to be alright. So when I come [to my office], I’m trying to do my best to make sure that we leave this state in a better way than we found it for the next generation.”