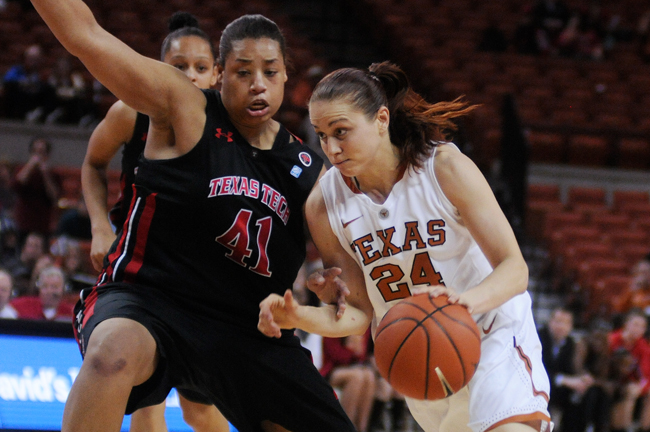 Junior guard Chassidy Fussell (24) attempts to slip past Texas Tech’s Kelsi Baker (41) during a recent Big 12 game. Fussell continues to lead the Longhorns in scoring with 15.9 points per game. " />

Junior guard Chassidy Fussell (24) attempts to slip past Texas Tech’s Kelsi Baker (41) during a recent Big 12 game. Fussell continues to lead the Longhorns in scoring with 15.9 points per game.

And then it was eight.

The Longhorns dropped their eighth straight contest in Norman on Saturday, 69-56, falling to 0-5 in the Big 12. Oklahoma was never pressed, outshooting Texas while never giving up the lead.

“I thought Oklahoma was Oklahoma today,” head coach Karen Aston said. “They continued to grind away like they do. They’re a really good offensive team, especially at the guard position.”

Texas played a solid first half, scoring ten points from Oklahoma turnovers while outperforming the Sooners on the fast break. Oklahoma took advantage of the post struggles for the Longhorns, scoring 12 second chance points on its way to a 33-27 halftime lead.

“I thought we did a great job in the first half showing some resolve,” Aston said. “Their post players were better than ours today; they were better than us today. We had way too many turnovers in the paint and we were out-competed today.”

The Sooners came out of the locker room with the same tenacity that they entered it, starting the half on a 12-5 run, stretching the lead and never letting up. Although the Texas guards did everything they could to close the gap, the usually sturdy post players for the team just weren’t in sync.

“Guards learned a lesson in the Texas Tech game and they were better today, but we haven’t put forth a total team effort,” Aston said. “Right now, we’ve got the guards doing really good but no presence in the paint, and then it flips.”

Junior Chassidy Fussell was the only bright spot in the game, scoring 21 points to go along with her nine rebounds after a poor showing against Texas Tech.

Although the Longhorns continue to be plagued by inconsistency, their four blocks and 11 steals are evidence of the team’s defensive resolve. Their defense has been solid and their rebounding has been even better despite the losses, which suggests there’s still life left in the team moving forward.

“This is such a young basketball team with people in positions that they haven’t been in before,” Aston said. “I think we’ve made progress.”

The Longhorns will try again to snap their losing streak when they travel to Lawrence, Kan., on Wednesday to take on the Kansas Jayhawks.