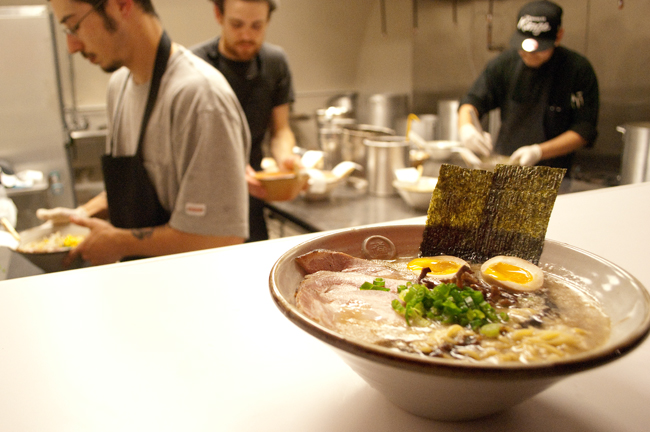 Chefs at Michi Ramen serve up a bowl of tonkotsu ramen during the soft opening of its new brick-and-mortar location Friday night. " />

Chefs at Michi Ramen serve up a bowl of tonkotsu ramen during the soft opening of its new brick-and-mortar location Friday night.

Michi Ramen, a new restaurant specializing in the Japanese dish of the same name, held its “soft opening” last Friday night, where it served up gobs of noodles submerged in gelatinous broth to tables of excited patrons. At first glance, Michi Ramen has all the ingredients for success in the Austin restaurant market: a food-trailer pedigree (they served up the same menu from a trailer on Anderson Lane), a suitable amount of buzz (they made it to No. 4 on the blog Eater Austin’s list of “Most Anticipated Bar, Brewery and Restaurant Openings of Early-ish ‘13”) and a focus on ramen, the hottest dish in town. Ramen has brought statewide accolades to the Austin restaurant Ramen Tatsu-Ya and features prominently on the menu of Chef Paul Qui’s venture East Side King’s new location at The Hole in the Wall.

But from the moment you walk into Michi Ramen’s new brick-and-mortar location on North Lamar, it is clear the folks there will need to make a few adjustments to the formula to achieve the ramen royalty-status of Ramen Tatsu-Ya and East Side King. The banner draped over the front of the building barely covers the name of the location’s previous tenants, and rather than install proper lighting, Michi is relying on two blinding floodlights placed precariously by the door.

Inside, the restaurant buzzed with patrons who had made it past the floodlights without losing their vision. The space was clean, crowded and bright, but the red accents and plain black tabletops made it look like a poor man’s Sushi Zushi. Seating was prompt, service was hurried and waiters buzzed around with iPads, energized and a little confused on their first night of work as a team. Glasses of water were forgotten and the green tea, when poured from the pitcher, revealed itself to be not tea but hot water. The waiter quickly apologized and plopped in a tea bag.

Off the short menu of appetizers, the goyza dumplings came tilted on their sides, swimming in a sea of soy sauce, their bottoms beautifully browned and their edges delicately folded. These greasy dumplings somehow managed to taste fresh and fatty at the same time, thanks to the veggies in the pork stuffing. The dish wasn’t revelatory, but it tasted very, very good.

Next came the piece de resistance of the meal, the ramen, whose broth can be ordered in three different thicknesses: light, regular or stout. Part of the beauty of ramen is that the plating is consistently gorgeous, and the ramen here is no exception. The Veggie Ramen, which is which is not available in differing broth thicknesses and, since the broth is made with pork, doesn’t represent a true ‘vegetarian’ option, came topped with a fragrant pile of chives, cabbage and sprouts. But upon tasting the pork-infused broth, there was less flavor than the fragrance indicated. In the Meat Lover’s Ramen with stout broth and the Michi Ramen with regular broth, the flavor wasn’t absent but was too dependent on grease. A friend summed it up by proclaiming, “It tastes like meat sauce, but it could use three times as much green.”

As the meal of a large table of dinners came to an end Friday night, the iPad-toting waiter began to talk strategy with the table about splitting the check. “We can do it, but we’ve just got to communicate,” the waiter said. You could say the same of Michi Ramen: it’s got the basics of a good restaurant, but somewhere between preparing the broth and opening its doors, it has confused the recipe.