Obama sworn in for second term 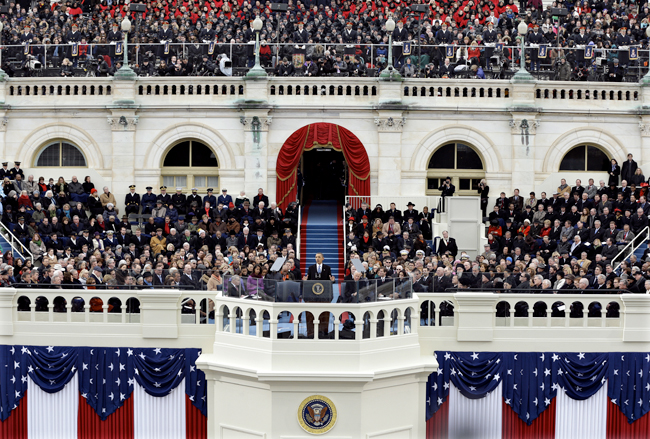 President Barack Obama speaks at the ceremonial swearing-in at the U.S. Capitol during the 57th Presidential Inauguration in Washington, on Monday, Jan. 21, 2013. " />

President Barack Obama speaks at the ceremonial swearing-in at the U.S. Capitol during the 57th Presidential Inauguration in Washington, on Monday, Jan. 21, 2013.

President Barack Obama continued to advise ideals of reinvention and change as a way to adapt to challenges in America’s future after he was sworn into his second presidential term at Monday’s inauguration ceremony.

His inaugural address urged Americans to work toward individual liberties as a collective, unified nation.

“We must harness new ideas and technology to remake our government, revamp our tax code, reform our schools and empower our citizens with the skills they need to work harder, learn more, reach higher,” Obama said in his address. “But while the means will change, our purpose endures: a nation that rewards the effort and determination of every single American.”

Because of a stipulation in the Constitution, the president is required to take office Jan. 20 of his new term. This private ceremony occurred Sunday in the Blue Room of the White House, according to the White House website. John Roberts Jr. , chief justice of the United States, administered Obama’s oath of office. Vice President Joe Biden was also officially sworn in Sunday by Supreme Court Justice Sonia Sotomayor at the Naval Observatory in Washington, D.C.

Several UT students had the opportunity to witness Monday’s inauguration firsthand because of the University’s Archer Fellowship Program. The program allows students who are interested in areas of public service to intern at various institutions in Washington, D.C.

Amanda Almeda, marketing and government junior and a current Archer Fellow, said being at the ceremony with other fellows made the experience more exciting.

“It was great that we were all there together just as we’re starting our lives and internships in D.C.,” Almeda said. “It was cool to be in the presence of so much history.”

Ha-Vi Nguyen, government and economics senior and an Archer Fellow, said Obama’s mention of moving forward with LGBTQ rights is a new but welcome addition to the history of presidential inauguration speeches.

“I’ve never seen [a stance] like that in any inauguration ceremony,” Nguyen said. “It was a good response from the crowd — everyone just cheered. It was just a great moment.”

“This speech was more of a tone of trying to keep America moving forward, whereas his speech from four years ago was about change and rebuilding,” Nguyen said. “Now we just have to keep pushing forward.”

Because of dual ceremonies, Obama is the second president in United States history to be sworn into office four times, with the other being Franklin Delano Roosevelt, who served four terms. Obama’s first term required him to be sworn in twice because of a wording issue between him and Chief Justice Roberts during the first oath.

Almeda said the feeling of witnessing the ceremony surrounded by so many other Americans was gratifying. Obama’s address exuded more confidence in initiatives he has been pushing since his first term, she said.

“It was a very intense experience, feeling like an American citizen and knowing that we’re all in it together,” Almeda said. “[Obama] came off more confidently about the points that he pushed for in his original campaign, now that he’s in his second term.”