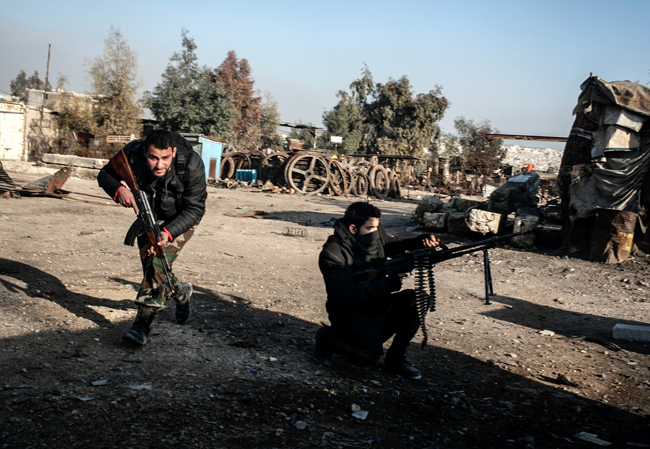 A Free Syrian Army fighter runs for cover as another fires his weapon during heavy clashes with government forces in Aleppo, Syria, Sunday. The revolt against President Bashar Assad began in March 2011 with peaceful protests but morphed into a civil war. " />

A Free Syrian Army fighter runs for cover as another fires his weapon during heavy clashes with government forces in Aleppo, Syria, Sunday. The revolt against President Bashar Assad began in March 2011 with peaceful protests but morphed into a civil war.

BEIRUT — Russia said Monday it is sending two planes to Lebanon to start evacuating its citizens from Syria, the strongest sign yet that President Bashar Assad’s most important international ally has serious doubts about his ability to cling to power.

The Russian announcement came as anti-government activists reported violence around the country, including air raids on the town of Beit Sahm near Damascus International Airport, just south of the capital.

Russian officials said about 100 of the tens of thousands of Russian nationals in the country will be taken out overland to Lebanon and flown home from there, presumably because renewed fighting near the airport in Damascus has made it too dangerous for the foreigners to use that route out of the Syrian capital.

Assad has dismissed calls that he step down. He has proposed a national reconciliation conference, elections and a new constitution, but the opposition insists he play no role in a resolution to the conflict. The U.N. says more than 60,000 people have died in the civil war since March 2011.

Russia has been Assad’s main ally since the conflict began, using its veto power in the U.N. Security Council to shield Damascus from international sanctions.

Russia recently started to distance itself from the Syrian ruler, signaling that it is resigned to him losing power. Russian President Vladimir Putin said last month that he understands Syria needs change and that he was not protecting Assad.

Russian officials say the evacuation of thousands of its citizens from Syria — many of them Russian women married to Syrians — could be by both air and sea.

A squadron of Russian Navy ships currently is in the Mediterranean for a planned exercise near Syrian shores later this month. Military officials earlier said that the exercise will simulate marines landing and taking people on board from the shore.

Earlier this month, Lakhdar Brahimi, who is the joint U.N.-Arab League envoy for Syria, said that Russia seemed as determined as the United States to end Syria’s civil war, but that he didn’t expect a political solution to emerge anytime soon.

The Arab League chief said Monday that Brahimi’s mission had not yielded even a “flicker of hope.”

In Riyadh, Saudi Arabia, Nabil Elaraby proposed that the heads of state gathered there at an economic summit call for an immediate meeting of the U.N. Security Council. He suggested the security council adopt a resolution calling for a cease-fire in Syria and establish a monitoring force to ensure compliance.

Syria’s defense minister said Monday that the army would keep chasing rebels all over the country “until it achieves victory and thwarts the conspiracy that Syria is being subjected to.”

Monday’s fighting included a helicopter raid in the northeastern town of Tabqa that killed eight people, according to the Britain-based Syrian Observatory for Human Rights.

The Observatory also reported a car bombing in the Damascus neighborhood of Dummar and said another car bomb exploded late Monday in central Syria, killing at least 30 pro-government gunmen in Salamiyeh.