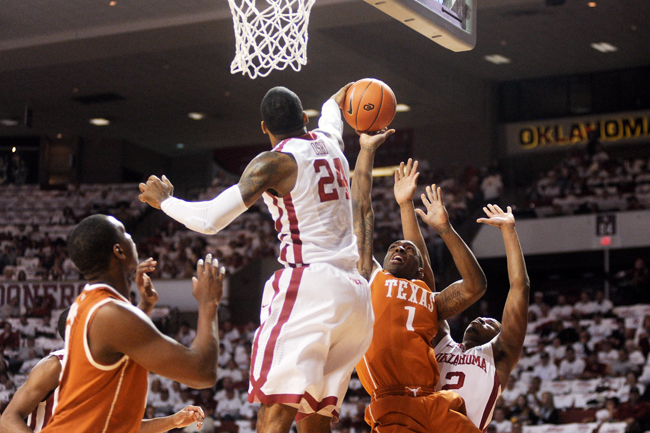 It’s easy to point out what’s wrong with Texas, but what’s not as simple is placing a finger on why the Longhorns have continued to make the same mistakes that have now resulted in five straight losses to open conference play. The Longhorns’ 73-67 loss to Oklahoma on Monday at Lloyd Noble Center is the latest in a growing number of disappointing performances. The losing streak is the longest during Rick Barnes’ tenure at Texas and the first time since the 1992-1993 season that the Longhorns have lost five games in a row.

“If I were watching on TV I would have turned it off,” Barnes said afterward.

To further compound their problems, the Longhorns will be without sophomore forward Jonathan Holmes for an extended period of time. Holmes, averaging 8.1 points 7.4 rebounds per game, sustained a broken right hand midway through the first half and did not return to the game. There’s no timetable on his return, although the team said he shouldn’t be ruled out for the season.

For now, without Holmes and suspended point guard Myck Kabongo, this is what Texas sees when it looks in the mirror: it doesn’t play well under pressure, commits far too many turnovers and doesn’t get to the free throw line enough to stay in close games. These are all aspects that can be improved upon, but the Longhorns (8-10, 0-5 Big 12) have yet to do so through 18 games. Against Oklahoma these themes came back to haunt Texas and it was unable to overcome itself in another second-half collapse.

Texas coughed up eight turnovers in its first nine possessions and let another first-half lead wither away as halftime neared. The Sooners’ Romero Osby scored 14 points in the first half on his way to a career-high 29-point performance.

“Got to give a lot of credit to their post players,” Barnes said. “We really believe Osby is one of the best players in the league. He’s a guy that we think can score in a lot of different ways. You love the way he plays, he’s always within himself.”

The Sooners were able to shake a slow start shooting the ball by hitting the offensive glass and converting easy baskets inside. Their defensive pressure forced Texas into uncomfortable situations which inevitably led to more turnovers. The Sooners connected on at least a few alley-oop dunks throughout the game, which worked the home crowd into a frenzy and made it tough for Texas to get in to any sort of rhythm.

Sheldon McClellan led the Longhorns in scoring with a career-high 25 points, but had to do so coming off the bench. The sophomore guard has done his part in becoming a more reliable scorer, but he has yet to become involved in the offense enough to warrant a starting position. His scoring touch works well coming in as a substitute, but he will have to crash the boards and create more off the dribble to evolve into something more than just a scoring maven. He won’t score 25 points every game, and when he’s not hitting shots it makes it simple for opponents to shut down the Longhorns offensively. McClellan gets by fine on his own, but he could use a little help from his friends.

The Sooners (13-4, 4-1) made almost half of their 52 shots as a team, and their 48.1 percent field goal percentage was the highest number the Longhorns have given up all year.