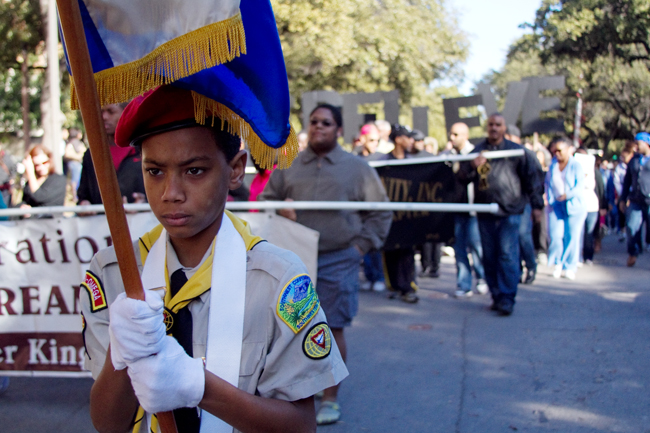 In celebration of Martin Luther King, Jr. Day, thousands of people gathered Monday to commemorate King’s legacy in the Annual MLK Community March leading from the UT campus to the Texas Capitol.

The 19th annual citywide celebration, overseen by the Austin Area Heritage Council, began with a program near the MLK statue on the UT campus, where President William Powers Jr. and other guests spoke of King’s legacy.

The Sweet Home Baptist Church choir performed a selection of gospel music on the south steps of the Texas Capitol. The march continued to the MLK Community Festival held at Huston-Tillotson University, a historically black institution affiliated with the United Negro College Fund.

Michelle Sanders, who attended the event, said the inauguration demonstrates that King’s dream is still alive.

“Now people can sit at the dinner table and tell their children and grandchildren that they can do anything,” Sanders said.

Nancy Carrales, a volunteer for the food bank, said helping those less fortunate represents one of the many beliefs of Dr. King.

Business junior George Chidiac marched from the East Mall to the Capitol and said the event underscores the fact that the majority of Americans believe in King’s dreams for our country.

“The fact that King gave [the ‘I have a Dream’] speech and it was not just words that were said but actually became true speaks volumes,” Chidiac said. “Anyone can say anything, hope and dream for it but the fact that it happens says a lot about America moving forward.”

Chidiac said dehumanization and suppression are on the decline but inequality will continue to be an issue.

“There will always be a struggle to looking at each other in a way that we can love our fellow man the way we love ourselves, but we can look at Dr. King’s message and continue to press forward,” he said.

Louis Sims, a participant in the march, said growing up, he felt segregation was just a way of life.

“It was like an oxymoron; we accepted the segregation even though it was not pleasant,” Sims said. “But at least some of the dreams Dr. King envisioned [have] come to fruition.”