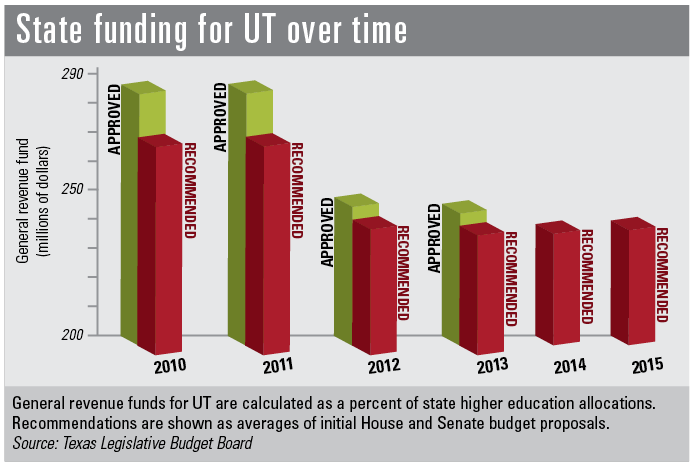 General revenue funds for UT are calculated as a percent of state higher education allocations. Recommendations are shown as averages of initial House and Senate budget proposals.
Source: Texas Legislative Budget Board.

The University would face a cut of almost 3 percent in state funds if Texas legislators follow budget recommendations released last week, although the budget may change during the legislative process.

Both of the initial proposals are about $9 to $14 million less than the $492.5 million the Legislature allocated to UT in the last biennium.

The Legislative Budget Board prepared the proposals. The board is a permanent joint committee of the Legislature that drafts budget and policy recommendations for legislative appropriations. Legislators use the proposals as a foundation for determining a final amount to allocate to various state agencies and programs.

Mary Knight, associate vice president and University budget director, said the decrease could be caused by funds being allocated to other universities that are growing faster than UT.

“If some are growing more than UT-Austin, we may get a smaller portion of the overall pie,” Knight said.

In addition to general revenue funds, the University also receives $50 million to $52 million annually from the Legislature to pay employee benefits, Knight said.

Knight said the Legislature’s funding recommendations are preliminary and may not accurately indicate how much legislators will approve in their final budget.

The Senate Finance Committee is scheduled to discuss state appropriations to UT when it meets Monday.

President William Powers Jr., UT System Chancellor Francisco Cigarroa and members of the UT System Board of Regents will likely be called to the Legislature to explain the University’s and other system universities’ funding priorities, but the Legislature ultimately controls how much funding the University receives, Knight said.

“There’s really no way to speculate,” Knight said. “It’s all up to legislative decisions they’re going to be making.”

In past legislative sessions, final funding for UT differed from initial recommendations.

In 2009, the House and Senate both recommended allocating $541.3 million to the University for the 2010-11 biennium before the Legislature approved $571.7 million.

During the past three years, state funds accounted for 13 to 14 percent of the University’s annual operating budget, according to budget presentations available on the UT Budget Office’s website.

Under both House and Senate proposals, UT’s budget makes up about 3.2 percent of the state’s total higher education budget, which is slightly above the 3.1 percent of Texas A&M’s proposed allocation. The two flagship universities received almost 1 percent more than the University of Houston and Texas Tech University, which are the next two largest public universities in the state.