Longhorns travel to Sunflower State looking for a spark 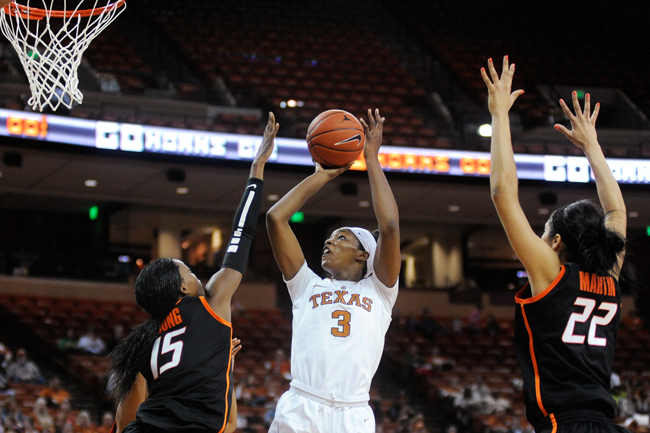 Sophomore forward Nneka Enemkpali launches a shot in the midst of a slow season.  Texas has lost its last eight games and heads to Lawrence to face Kansas on Wednesday.

One month ago the Longhorns were hoping the New Year would push them in the complete opposite direction than they are going right now.

Texas (7-10) has gone 0-8 since late December with six straight conference losses. Currently sitting in the Big 12 cellar, this has been the worst start in conference play that the Longhorns have had in school history. However, they get another shot to turn it all around this evening as they face another conference foe, Kansas, in Lawrence.

Texas will be without its leading scorer, Chassidy Fussell, and leading rebounder, Nneka Enemkpali, both of whom will sit out against Kansas due to an undisclosed violation of team rules. Fussell, who is averaging 15.9 points per game this year, scored 21 points in a loss to Oklahoma last Saturday. Enemkpali is averaging 9.8 rebounds per game, the second-most in the Big 12.

Kansas is coming off of a three-game losing streak, making its record 2-3 in Big 12 play. The Jayhawks are 9-1 this season at Allen Fieldhouse, their home court, and look to take advantage of this struggling Texas team.

In its 23 meetings, Texas leads the series, 14-9, winning 10 of the previous 14 matches. In its most recent meeting last February, Kansas overwhelmed Texas, taking a commanding 85-61 victory.

“They take turns making mistakes when they’re young,” head coach Karen Aston said. “A lot of times you can put one freshman out there with older players and they’ll help them through their mistakes and they’ll reset when there is a mistake, or they’ll help them get where they’re supposed to be. But in our situation, we have freshmen telling freshmen a lot of the time, or a sophomore telling a freshman.”

They haven’t just been taking steps backwards, however. A lesson comes out of each game but consistency just hasn’t been a strong point of theirs.

“I think we’ve made progress,” Aston said. “Guards learned a lesson in the Texas Tech game and they were better today, but we haven’t put forth a total team effort. Right now, we’ve got the guards doing really good but no presence in the paint, and then it flips.”

Just like the Longhorns, the season is still young, but changes need to be made in order to secure a postseason spot. The Big 12 is one of the hardest conferences to play in. Kansas is Texas’ first target in the path to getting back on track.

“Until we can learn to be disciplined together and do this thing together, then we’re going to continue to have disappointments in the Big 12 because it is too balanced as a league,” Aston said.